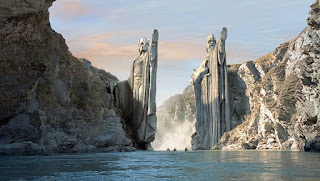 "Goebbels and Hitler were as obsessed with movies as American adolescents are today with social media."


The front page headline in today's Dominion Post is WELLINGTON HAS EYE ON CHINESE FILM MARKET.  This is big news -- as the whole film world knows, Wellington is the home of Weta Workshop, the firm that creates the effects for a whole raft of big-earning, award-winning films. Here, we are accustomed to film stars as neighbors, and previews of mighty productions.  The Weta Cave is a hugely popular tourist attraction, and Peter Jackson is a big mover in town.

"Lights, camera, let us be part of the action.  Wellington is forging closer ties with the 'exploding' Chinese film industry," the story begins.

"Representatives from Wellington's economic agency and the New Zealand screen sector - including producers, post-production house, studios and the NZ Film Commission - recently travelled to China, which is tipped to outgrow the massive American film industry."

Agreements have been signed, and many handshakes exchanged, and an annual growth rate of ten per cent is confidently predicted.  "China will surpass the United States to become the number one box office," said Dave Gibson, the outgoing CEO of the Film Commission.

Five of the top ten films released in China in 2016 (yes, 50 per cent), were co-productions with New Zealand, and the figure is going to zoom.

How important is this development?  Does it merely mean a loss in profits for folks in the US?

According to a recent (October 26, 2017) paper in The New York Review of Books, dominance of the film market is much more critical than that. Robert O. Paxton, in his review of The Nazi-Fascist New Order for European Culture, by Benjamin B. Martin, reveals that both Hitler and Mussolini sought to dominate the arts, as part of the wider plan to dominate the western world.

"Cinema," he says, "was the Nazi leaders’ first cultural target."

"Convinced that cinema was their era’s main engine of cultural influence, they tried to control film-making as far as their influence could reach. At the Venice Film Festival in 1935, at Goebbels’s instigation, delegates of twelve nations agreed to create an International Film Chamber (IFC) designed to establish a continent-wide system of film exchange and regulation.
"As the possessor of the continent’s largest and most powerful film industry, Germany became the dominant force in the IFC. Fascist Italy, however, assured for itself a strong second position by exploiting its considerable film-producing assets, such as the technologically advanced studios of Cinecittà and the Venice Film Festival, which continued to be the main venue of IFC activities."
And the US film industry was firmly in mind.  "The main role of the IFC was to combat the Hollywood menace. The dominance of American films had troubled European filmmakers and intellectuals from the beginning. By 1928 54 percent of all films shown in France, 72 percent in Britain, and 80 percent in Italy came from Hollywood. Already in the 1920s most European countries had imposed quotas on American films or limited them by reciprocity agreements. The respite given to European films by the arrival of “talkies” in 1929 had been brief, as expert dubbing soon allowed Hollywood films to predominate again. Many Europeans endorsed the IFC position that American films were trivial entertainment designed to make money, while European films were artistic creations that deserved protection."
Well, as we know, the "soft" approach to world dominance collapsed at the same time as the "hard" military campaign.  And Hollywood, as money-obsessed as ever, was left to take over the cinematic scene.
But now it looks as if another change is in the air.  The films might be as "trivial" and profit-focused as ever, but this new development in the industry is yet more evidence of America's ever-increasing loss of status as a world leader.
It might be significant, too, that another page in today's Dominion Post is devoted to the interesting story of what it is like to be a Chinese New Zealander.

Posted by World of the Written Word at 9:49 AM
Email ThisBlogThis!Share to TwitterShare to FacebookShare to Pinterest