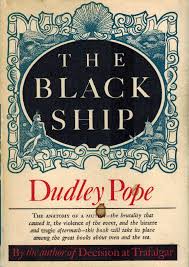 Some years ago, I was given a gripping account of one of the world's most famous (or infamous) mutinies, that on HMS Hermione, in 1797.  Written by Dudley Pope, it was a page-turner.

Now, according to an interesting article in The Smithsonian by A. Roger Ekirch, the mutiny may well have had great influence on American politics.

Headlined HOW THE BLOODIEST MUTINY IN BRITISH NAVAL HISTORY HELPED CREATE AMERICAN POLITICAL ASYLUM, the paper details the changes it made in American attitudes to those seeking asylum.

On the night of September 22, 1797, the bloodiest mutiny ever suffered by the Royal Navy erupted aboard the frigate HMS Hermione off the western coast of Puerto Rico. Stabbed repeatedly with cutlasses and bayonets, ten officers, including the ship’s sadistic captain, Hugh Pigot, were thrown overboard.

If ever a man deserved a violent death, it was Pigot.  A sadist, he ordered so many floggings that two of his men died during punishment.  He also was the man who decreed that the last man down from the rigging should be flogged -- utterly unfair, as the most experienced topman was the one at the outermost end of the yard, so naturally was the last down.  Three young seamen, in their haste to get down, fell to their deaths, and Pigot ordered that the bodies of the "lubbers" should be thrown overboard.

Nonetheless, the mutiny was a particularly brutal one.  Men who refused to take part were hacked down, just like the captain and officers.  It was claimed that Pigot, with others, was still alive when thrown overboard.

The problem, for Washington, was that a number of the seamen were Americans who had been pressed -- stolen from American ships, and forced to served the Royal Navy.

One was named Jonathan Robbins,  As the paper relates, "In the summer of 1799, [President] Adams ignited a political firestorm by authorizing a federal court in Charleston, South Carolina, to surrender to the British a seaman named Jonathan Robbins—a native son, he claimed, of Danbury, Connecticut, who had been impressed by the Royal Navy. The outrage was fanned in subsequent weeks by news from Jamaica of the sailor’s hanging, not as Jonathan Robbins, a United States citizen, but, the British claimed, as the reputed Irish ringleader Thomas Nash.

"Although his true identity remained hotly contested, that did not put an end to the

martyrdom of Jonathan Robbins. Mourned by Jeffersonian Republicans as a freedom fighter against British tyranny, the incident proved pivotal to Adams’s bitter loss to Jefferson in the monumental presidential election of 1800. The Robbins crisis also contributed to a dramatic shift in United States immigration policy.

"In his first address to Congress, on December 8, 1801, President Jefferson pointedly invoked America’s messianic pledge to afford a haven for persecuted refugees. In stark contrast to the nativism of the Adams years, he demanded, “Shall we refuse to the unhappy fugitives from distress, that hospitality which the savages of the wilderness extended to our fathers arriving in this land? Shall oppressed humanity find no asylum on this globe?”

"For 43 years after the extradition of Robbins, not one person, citizen or alien, would be surrendered by the federal government to another country, including other mutineers from the Hermione. And when the United States finally signed an extradition agreement with Great Britain in 1842 as part of the Webster-Ashburton Treaty, “political offenses,” including mutiny, desertion, and treason were exempted from a list of extraditable crimes in order to avoid reviving the “popular clamour” of the Robbins controversy."