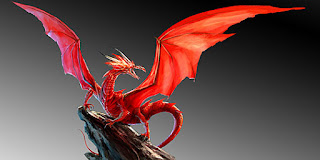 Believe or not, dragon's blood used to be part of the sea-surgeon's pharmacopeia.  More formally called Sanguis draconis, it was prescribed as an astringent and incrassating tonic -- it thickened body fluids, which was considered a good solution to weeping wounds.

John Woodall, who wrote the first sea-surgeon's medical guide (The Surgions Mate) and published it in 1617, "for the benefit of young Sea-Surgions, imployed in the East-India Companies affairs," listed Sanguis Draconis in his chapter "Of the Medicines, and their uses."

"Sanguis Draconis is colde and drie in the first degree," he wrote; "it is of an astringent quality, it closeth up wounds, and confirmeth the weake parts, and stayeth the fluxes of outward wounds."

Unromantically, however, the "blood" did not come from dragons.  It was the gum resin secreted by the fruits of East Indian climbing palms, once classified as Calamus draco, and now listed as two species, Daemonorops propinquus and D. ruber.  I guess it was called "blood" because the gum renders a deep red color in an alcohol solution.  And, while it left the sea-surgeon's medical chest a long time ago, it is still used as a coloring agent in varnish and paint.

However, there are real dragons in this world, which I found on the Indonesian island Komodo. 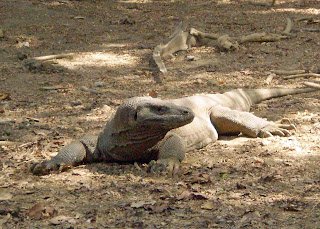 And, quite frankly, I found them terrifying.  Not only are they unsettlingly well-camouflaged, but they stink.  And they drool ghastly bloodflecked strings of saliva.  Reportedly, they run very fast, chasing down prey and delivering a nasty bite.  And then they follow the bitten animal (or person) while the saliva in the bite takes effect.  Slowly, the victim weakens, until it can no longer fight back.  And the patient dragon enjoys a feast.

However, it does seem that the blood of Komodo dragons could be very, very useful in medicine.  According to Science Daily, Komodo dragon blood may hold the solution to the ever-growing problem of antibiotic resistance in disease bacteria.

As the article summarizes, "In a land where survival is precarious, Komodo dragons thrive despite being exposed to scads of bacteria that would kill less hardy creatures. Now in a study, scientists report that they have detected antimicrobial protein fragments in the lizard's blood that appear to help them resist deadly infections. The discovery could lead to the development of new drugs capable of combating bacteria that have become resistant to antibiotics."

And so, you never know, Dragon's Blood may return to the sea-surgeon's medical chest, hundreds of years after Woodall.

Posted by World of the Written Word at 11:46 AM
Email ThisBlogThis!Share to TwitterShare to FacebookShare to Pinterest