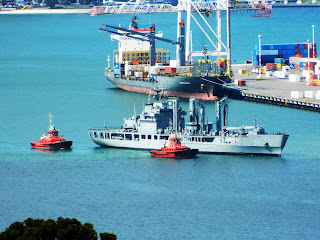 To my surprise, yesterday morning when I looked out the window, there was a navy ship arriving.  But what was it?  And from where?  There is a celebration on the water this weekend, it being the 75th anniversary of the creation of the Royal New Zealand Navy, but this was no New Zealander, and there was no kind of welcome.  Just a lot of infuriated siren hooting from the container ship at the end of the wharf, the skipper trying to summon his tardy crew on board, so he could get going.

There were two of these gray strangers, or so I found when I turned the telescope to the wharf.  But what? And why? 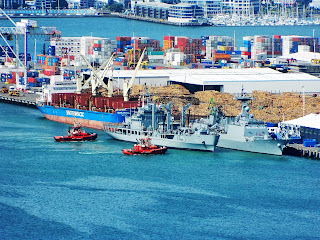 This morning's newspaper solved the mystery.  The one I watched arrive is a guided missile destroyer from South Korea.  It's name is ROKS Chungmu-gong Ye Shi-sun. And the one that was already moored is its support ship, ROKS Cheonji. 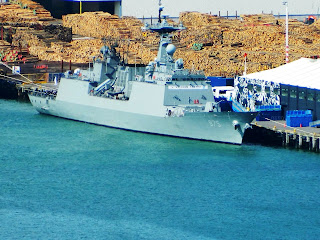 They came here from Papeete, French Polynesia, where the wharf is nothing like this: 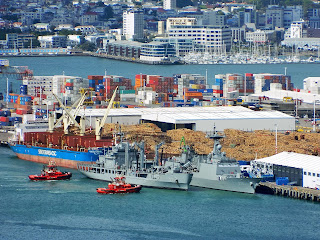 They, and their crews of about 600 in total (including trainees) will be here until Sunday.  This means that they will be able to fraternise with Kiwi navymen, as HMNZS Canterbury (another support ship) will be moored at Queen's Wharf, downtown where all the pubs are.

The commander of the little group is Rear Admiral Sang-Hoon Lee.  On October 30 they will head off for Australia.

I wish they had had the nice reception we had earlier this year when our ship arrived at Busan ....
Posted by World of the Written Word at 2:12 PM
Email ThisBlogThis!Share to TwitterShare to FacebookShare to Pinterest

They look like pretty advanced ships re stealth tech. Mind, I guess they have a pretty good budget for military/navy (and with the nutters up north).

You're lucky overlooking Wellington Harbour. We lived at Diamond Harbour for six years (up until just after earthquakes) and I loved watching the goings on over at Lyttelton port. Home now in the Mahau Sounds which is great in a very different way; biggest boats are the mussel fleet, so will always miss the commercial shipping (especially a port at night).

Thanks for the comment, Mark. We even envy ourselves our view, when we are away from home! And the two ships are still here, looking rather sad at the Container Wharf, when there is so much hoopla with the Canterbury staging shows downtown.