Tooth and Claw and lots of Gore 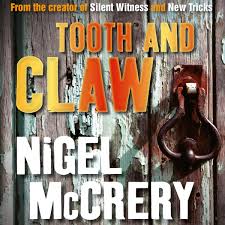 Talking of novelists making political statements, high up in the list of gratuitous commentators must be British crime writers.  Books by Ian Rankin, Stephen Booth, and so forth, might be extremely well written, but one gets so tired of the constant griping about the current state of British policing.  So it was a relief to find a British crime novel that is free of political complaints.

I picked up Tooth and Claw because I am a fan of the TV series "Silent Witness" and "New Tricks," which feature unusual scenarios and even more unusual characters, and in this respect was not disappointed at all.

The detective, DCI Mark Lapslie, suffers from a neurological complaint called synaesthesia, something I had never heard of before.  Apparently, it is a bizarre cross-wiring in the brain, where sensations are registered by the wrong organ.  Some people see numbers and letters as colors, while others feel tastes with their skin -- chicken might be prickly, while cucumber might be hot.  Lapslie "hears" sounds as tastes -- a knock on his front door tastes like herrings, while his partner, Emma Bradbury, has a voice with a soothing citrus tang.  A train rushing by causes such a gush of salt and caramel in his mouth that he is forced to vomit.  Very hampering.

The serial killer is described and developed just as carefully.  He has porphyria, the disease that we know best from the film "The Madness of King George."  His urine is purple, and he thinks he is being watched and followed.  He is also a remarkably savage sadist -- and that is the major flaw of the book.  His nastiness is described in just too much detail, by a writer who is an expert with words.  Some pages were so repulsive that I had to skim and skip.  On the plus side, though, he is understandable.  Read to the end to find the real culprit.

Posted by World of the Written Word at 10:19 AM
Email ThisBlogThis!Share to TwitterShare to FacebookShare to Pinterest