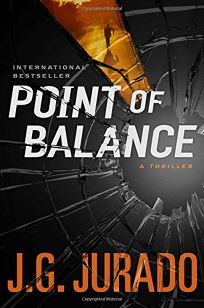 Publishers and librarians make this a rather hard-to-find book.  First of all, there is confusion about the precise identity of the bestselling (published in 40+ languages) author.  His name is actually Juan Gomez-Jurado, so the book might be filed under the letter "G" but is equally likely to be found alongside books by authors whose names begin with "J."  The title of the book is also unreliable -- it has also appeared under the English title "Tipping Point," as well as its various names in other tongues. (It was originally published in Spanish, the English edition being a translation by Martin Michael Roberts, who did a brilliant job.)

Despite all these little problems, I found it.  And I liked it a lot, even if at times I wondered why I was so gripped.  The plot is melodramatic enough for any television mini-series:  A brilliant, recently widowed and deeply grieving neurosurgeon arrives home after being delayed by an emergency operation to find that his little daughter and the live-in Bulgarian nanny are gone.  His daughter has been kidnapped, and he has to commit an unthinkable crime if he is ever to get her back.

Events follow fast in this "unrelentingly suspenseful" thriller (as described in the Publishers Weekly review) -- a fruitless hunt for the child at the doctor's in-laws' is accompanied by mysterious texts on his cellphone, which has been taken over by a computer hacking mastermind with a serial killer past.  The messages are standard TV thriller style, too -- GO HOME, NO COPS.  The surgeon obeys ... to find the strangled corpse of the nanny wrapped in plastic in his basement.  Then follows a summons to meet the mastermind of the murder, who gloatingly reveals that the little girl in trapped in a hole with limited air, and that she will die if the surgeon does not flunk his next operation, which is on the brain of the President, no less.

At this stage, the story should be too incredible to grip the reader further --the mastermind has been hired by someone even more mysterious to make sure the President dies, and this is his highly complicated way of going about it.  Yet I remained riveted. There was no way I was going to put this book down.

Flip, flip go the pages, turning faster and faster as the surgeon goes through mental and physical agonies trying to find a way out of this impossible dilemma.  Luckily (and even more incredibly), his dead wife's sister is on the Secret Service detail that guards the First Lady. Naturally, she is horrified and shocked at the very idea of letting the President die under the knife, so is willing to go to all lengths to foil the mastermind.  So we see the thriller unfold from two perspectives, in alternating chapters, adding to the tension as the duo struggle to beat the deadline, and rescue the girl in time.

Otherwise, there is no character development.  They are all unchanging, and there are basically only three of them -- the surgeon, the sister-in-law, and the mastermind.  There are others, but they are sketched so briefly that they remain extras -- all of them, that is, except one, a senior surgeon, Dr. Hochstetter, who is supposed to be a nasty, but is probably the most convincing character in the book.  Not only does he ensure that the book is catalogued as a medical mystery, but he provides the best description of a cancer growth a layman could hope to read -- the route of a rogue cell through its first division into a tiny astrocytona into a monster that feeds on the host's blood and lymph, taking over the entire organism in the dreaded process of metastasis -- a process that is doomed, because with the killing of the host the cancer has lost its own battle.

As Hochstetter blithely concludes, "So these dumb cells that wanted to be immortal wind up killing the organism that supported them.  That's it, folks."

Interestingly, like Frederick Forsyth, Gomez-Jurado likes making political points -- in this case the obscenity of a medical system that aims to make a profit from the patient; where hospitals satisfy their shareholders by making money out of human misery.

But he certainly gets away with it all -- the melodramatic made-for-film plot, the shallow characters, and the paragraphs of commentary -- because of his powerful, perfectly crafted writing.

I will certainly be looking for more.

Posted by World of the Written Word at 3:20 PM
Email ThisBlogThis!Share to TwitterShare to FacebookShare to Pinterest