Great review of A Watery Grave 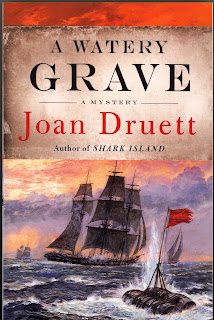 In the ocean of mystery fiction, it can be hard for an author, no matter how talented, to stand out. Druett manages to create something enjoyably unique in A WATERY GRAVE, both in her evocation of the nineteenth century maritime setting, and her creation of a fabulous protagonist, Wiki Coffin.

It is 1838, and part-New Zealand Maori, part-American Wiki Coffin is scheduled to embark with the US Exploring Expedition from Virginia when he finds a woman's body in a boat and is mistakenly arrested for murder. The Expedition is a big deal - seven ships packed with astronomers, map-makers, naturalists, and sailors, all tasked with charting the uncharted waters (and lands) of the South Seas - but has been much delayed by politics. Wiki is on board as a translator, but his skin colour sees him blamed for the killing, so the ships sail without him.

When Wiki is exonerated and freed, the local sheriff in Virginia sends him to catch up to the Expedition, having been deputised to find the real killer on board one of the seven ships.

Druett, an experienced non-fiction maritime writer, marvellously combines mystery and history in a unique crime novel setting. She vividly evokes nineteenth-century seafaring life as Wiki goes about observing and investigating his fellow expedition-ers - finding a good balance between weaving in interesting details that provide colour and texture, and not going information-overboard to such an extent it drowns the story.

Overall, I felt I was learning plenty about the setting (time and place) along the way, but in a fun and organic way; Druett creates a great atmosphere for her mystery. After rejoining the expedition, Wiki is confronted by an apparent suicide, then a deadly accident, in addition to the original murder. Compared to some other crime writers, the mystery plot in A WATERY GRAVE isn't as complex, puzzling, or fast-paced, but I still enjoyed how it unfolded, with plenty of suspects, clues, and red herrings on the way to a satisfying conclusion.

Along with her superb touch for setting, Druett has a knack for crafting intriguing characters, from our hero Wiki to many others on board. Based on the real-life expedition, with a fictional ship added, Druett mixes historical and fictional figures throughout her tale. There's a beguiling mix of personalities, motivations, and perspectives amongst the Expedition's officers, scientists, and sailors, and I particularly enjoyed how we not only get to know Wiki a little more as the story progresses, but that our perception of various characters changes subtly as Wiki learns more. No cardboard cut-outs or movable pieces here.

Overall, Druett has created an intriguing and entertaining mystery, drenched in maritime colour, with a terrific and engaging lead who I will have no hesitation in following throughout more adventures.

I originally read this book and wrote a short review for the Herald on Sunday newspaper back in 2010/2011. This review is a more in-depth look at my thoughts on what is a very enjoyable read, less constrained by print word counts.
Posted by World of the Written Word at 8:21 AM
Email ThisBlogThis!Share to TwitterShare to FacebookShare to Pinterest