As readers may remember, I refuse to commemorate death dates, but there are other dates worth noting.

June 13 is the birthday of: 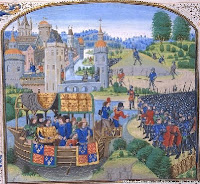 On this day, the downtrodden made great strides:

1381 - The Peasants' Revolt began, led by the immortal Wat Tyler

1966 - The US Supreme Court issued its landmark Miranda ruling that suspects must be informed of their constitutional rights before being questioned by the police.  And how many murder stories, both in print and on screen, have been happy to adapt to that?  You have to admit, the Miranda reading always makes a great line.

1971 - the New York Times began publishing the Pentagon Papers, a secret study of US involvement in Vietnam
Posted by World of the Written Word at 7:25 PM
Email ThisBlogThis!Share to TwitterShare to FacebookShare to Pinterest