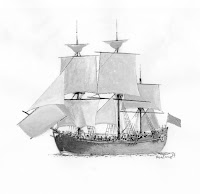 Many accounts of James Cook's first voyage to the South Pacific (1768-71) make scant mention of the Tahitian high priest Tupaia who became an invaluable navigator and translator on Cook's ship Endeavour for the latter part of the voyage. Maritime historian Druett's (Island of the Lost) refreshing, detailed, and insightful biographical history redresses that lack.

Much of what is known about Tupaia comes from the journals of the officers, scientists, and seamen with whom he shared the voyage, and Druett has drawn heavily upon thse sources, showing Tupaia to have had extensive knowledge of South Pacific island locations beyond Tahiti and outstanding skill in celestial navigation. He also helped the Endeavour's crew in translating the language and interpreting local culture on other Polynesian islands where Cook conducted extensive explorations.

Tupaia's legacy is apparent in his fascinating drawings made during the ship's voyage, reproduced here, which provide a glimpse into his perceptions of the world around him.

VERDICT Druett's narrative beautifully captures the essence of Tupaia's world and brings it alive for readers. Her excellent study of an extraordinary and nearly forgotten Tahitian should be enjoyed by readers interested in British maritime history and Polynesian history and culture.

Tupaia is on my to-read list, for when I finish the book I'm currently reading. What's its name again? Oh yes, Hen Frigates. :)