A highly unusual feminist and the pre-cursor of the haiku

What came before the English haiku?
Many of us learned in school about the beguiling Japanese haiku poetry form, which was adapted for English and American use, and is still popular today.  Basically, the poem consists of three lines, the first five syllables long, the second seven syllables, and the last five.  There must also be a reference to a season, and the linking of two poetic images.
An example, from American poet Richard Wright


To my surprise, while researching the short life of Sydney Parkinson

, the talented natural history draughtsman who sailed (and died) on the Endeavour, I found that the cousin he admired and loved, Jane Gomeldon

, was the inventor of the 'maxim,' the pre-cursor of the English haiku. 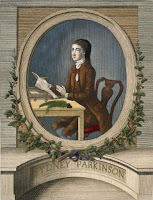 The World in general is a State
Of Surprise
Each wondering at the Conduct of their
Neighbour
Jane is more famous (or infamous) for the remarkable life she led than for being the originator of this neat, satirical form of poetry.  Born Middleton, she was a Quaker, born in Newcastle to a family of Quaker glassmakers, and because of this background was unusually well educated for a woman of that time.  Unfortunately, however, she fell in love with a cad at a very young age, and had the bad judgement to marry him.  This was Francis Gomeldon, an officer in a Regiment of Foot.
Quickly realizing her blunder, she fled to France, where she had many adventures in the guise of a man, including paying court to a pretty young nun, who was silly enough to elope with her.  In 1740 her estranged husband placed an advertisement in the Newcastle Journal, announcing that she had left him.  Jane responded with her own advertisement, describing his cruelty, and accusing him of ransacking the fortune her mother had left her, despite the legal requirement written into it reserving it for her own use.  In 1742 she brought a suit against him, on the grounds of cruelty.
Eight years later, her husband died, but -- surprise, surprise -- left nothing to her in his Will.  Luckily, it seems, she was still solvent, because after cousin Sydney was hired by Joseph Banks to travel with him, she hatched a plan to voyage on the Endeavour, too.  It came to naught, unfortunately.  While she would not have been the first woman to go around the world dressed as a man, she certainly would have written a very good book, revealing who knows what ...
Posted by World of the Written Word at 10:19 AM
Email ThisBlogThis!Share to TwitterShare to FacebookShare to Pinterest

Good Lord! I'd never dare invent such an over-the-top life story for a character. I hope someone has written this amazing lady's biography!

Nope -- she's all yours, Shayne! All you need is a grant to go to Newcastle and research her ... The portrait is of Sydney Parkinson, her cousin. There is another portrait, that is SUPPOSED to be a self-portrait of Sydney as a teenager, but everyone who looks at it scoffs, and says it is a girl. Could it be a portrait of Jane? There is no picture of her anywhere, so nothing to compare, but it would be nice to say YES.

:-) A somewhat tempting thought, but my imaginary characters are keeping me busy enough at the moment.

Still, a fascinating story, and with a New Zealand connection to add to the allure!

Hello, so very delighted to come across this post, and discover that you have written a biography of Tupaia, which I am eager to get hold of. I have been working on a creative nonfiction book which delves into the life of Parkinson (and also, consequently, his cousin Jane). Glad to see someone other than myself might have an interest! I wondered whether you might have seen Parkinson's vocabularies at SOAS? The front pages contain some strange sketches which appear to me to be navigational studies by Tupaia. They are a much heavier hand than Parkinson's.

...and, by the by, there IS a portrait of Jane (the one she had engraved) in the British Museum P&D--it is a mezzotint. You can pull it up from their website. It might be listed as "Mrs. Gomeldon."

That's so fascinating, Emily -- thank you so much for contributing this. No, I haven't seen Parkinson's vocabularies, and I am a long way from the School of Oriental and Asian Studies ... Do you have copies? I don't believe I have ever seen Parkinson's handwriting! I will hunt up the image of Jane right away. Cheers, Joan

Joan,
I wish I did have an image of the vocabularies--I spent a week transcribing them by hand because no scans, photos etc. were permitted. I was later told that a photographer could be hired, but when I inquired of the cost I never got a reply. Particularly I wanted the sketches which I attribute to Tupaia, so that I could ask other scholars about them. I asked Dr. Nicholas Thomas some time back if he had studied them, but he was not aware of them. However, I do have a new contact who is a writer-in-residence at SOAS, I'll ask whether she can work some magic, and I'll be happy to pass on whatever comes of that. As for Parkinson's writing, some of his notes are reproduced in Joppien / Smith, The Art of Captain Cook's voyages. His vocabularies are fascinating, though, because you get a very good sense of his character by the way he defines words--some concepts really push the bounds of his sense of propriety, and he really struggles to find unoffensive ways of describing them--very amusing. Parkinson's linguistic studies are more extensive than those of Banks or Solander, though, and he even includes recipes (in Tahitian) as well as some conversations. Banks is always described as the diplomat, but Parkinson seems to have been more adept as a communicator, if their written notes are a good indication.
Really enjoying the other posts on your blogsite--I am hoping to start one myself soon, and so I've been culling ideas about content, layout etc. from others I find successful. Thanks!

Hi again Emily, and thanks for your long and interesting comment. I do wish I had known about the vocabulary while I was researching my biography of Tupaia, because I did find Solander's vocabulary of Tahitian words at the Beinecke Rare Books Library at Yale, and found it most revealing, especially as it was so obvious he had consulted Tupaia while compiling it. Bernard Smith remarked in one of his books or papers (Imagining the Pacific, perhaps) that Parkinson was prudish, and so I can imagine the mental gymnastics! I looked up my copy of Smith and Joppien, and found notations in Parkinson's hand, as you suggested -- I had discounted the titles, assuming they had been written by some archivist -- but now see they are mostly by him. His writing is quite a contrast to Sporing's clerkly hand! Good luck with the blog -- it is a lot of fun, though time-consuming. And keep in touch. This is getting rather like a facebook conversation (without the inadvertent hiatus every time you hit "enter")! You are welcome to get in touch directly at druettjo@yahoo.com.au

Hello Joan, this is such a fascinating story about Jane. I wonder where you found your research? I stumbled across this story while researching Georgian newspapers and I've spent hours trying to stand up this story (I read about it in a book about Newcastle) to no avail. I've even been to the National Archives in London and seen the parchment documents of her divorce case (excitingly I saw her signature too). If you can please point me to a new source which can back up the story about Jane's French adventure, I'd be hugely grateful.