It's never too late to return a library book 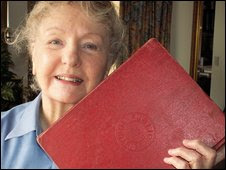 Conscience struck after 70 years, and a book has been returned to the Cubitt Town Library, Tower Hamlets, East London.
The BBC reports that Iris Chadwick (pictured with the book), who used to live on the Isle of Dogs, before moving to her current residence in Dorset, found the book while clearing out her house.
She borrowed the score of the musical Rose Marie from the library in 1939, on the eve of war, when she was just thirteen. Over the next 70 years, as the story poetically relates, "communism rose and fell, England won the football World Cup and man set foot on the moon."
And all that time the book was sitting on (or in) or piano stool, until Mrs. Chadwick found it. "It was part of my childhood," she said. Her first thought was to take it to a charity shop, but then she bit the bullet, set thoughts of library fines firmly aside, and made the trip to Tower Hamlets.
At 10p a day, the fine would have topped a hefty two-and-a-half thousand quid, but to Mrs. Chadwick's vast relief, the council agreed to waive it.
Encouraged by this evidence that it is never too late to return a library book, they have introduced a three-month amnesty for late library books.
Posted by World of the Written Word at 9:58 AM
Email ThisBlogThis!Share to TwitterShare to FacebookShare to Pinterest