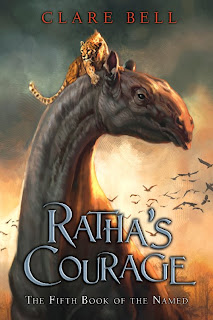 Back in the 1980s and 1990s, a writer for young adults, Clare Bell, produced a four-book fantasty series about sentient big cats in the prehistoric Miocene Age (20 million years ago) who try to build a civilization. Called The Named, it was quite popular, but was dropped after the fourth in the series, Ratha’s Creature.

But with the popularity of Erin Hunter’s The Warriors (a series about feral felines and their world), The Named started doing well in the used book market. Penguin noticed and decided to re-issue the series. They invited Clare to write a new book, and she cooperatively produced Ratha’s Courage.

But publishers are fickle things. By the time Clare had finished the book and the first galleys were produced, Penguin was less than enthused with the sales prospects. Before the book hit the press, they dropped it.

Enter Sheila Ruth of Imaginator Press, blogger for "Wands and Worlds", a very, very popular YA site, and also the creator of the Cybils, the independent award for YA fantasy. She didn’t want to see this wonderful series die, and so bought the North American rights to Ratha’s Courage. With the strength of the author’s marketing and community ties to the YA fantasy market, this could do very well for Imaginator and Clare.

Beagle Bay will distribute. http://www.beaglebay.com/rcncatpg.htm
http://www.imaginatorpress.com/
http://www.wandsandworlds.com/blog1/
Posted by World of the Written Word at 2:48 PM
Email ThisBlogThis!Share to TwitterShare to FacebookShare to Pinterest

Thanks so much for the shout-out. I'm tremendously excited to have the opportunity to be a part of this wonderful series. It's really the fans that have kept the series alive; it was young fans on Wands and Worlds who first suggested to me that I should publish it, and I understand that young fans were instrumental in bringing the original books back into print last year, as well.