Ruth Ware's The IT girl 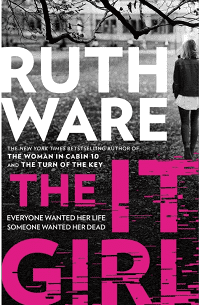 No, not internet IT, but IT from the swinging Charleston era, when the IT girl had everything, the beautiful and rich sex kitten supreme.

And April had IT all -- until someone strangled her ....

Ruth Ware is a clever, clever author. I love the way she entwines other books -- classic books -- into her plot development. Rebecca, Turn of the Screw, and so forth.

I assume that this one is based on the classic play by Euripides, Medea.  The author gives this away quite early on. The main character -- April, the victim of the murder -- definitely echoes the mythic queen. Blessed by the sun, with magical qualities, and yet murderously inclined. April is all of that, beautiful, rich, entitled, glamorous, and yet vicious. She doesn't quite kill, but she plays really vicious practical jokes on her victims. So well portrayed that after just a few chapters I was willing to give a medal to whoever topped her.But who was it? That is the mystery. And it is a good mystery, too. I didn't guess the murderer, and enjoyed the surprise.Apart from April, though, the characters were tenuous. Hannah, the other main protagonist, was so one-dimensional and crippled with angst that I couldn't understand why her saint of a husband put up with her. The others were even more sketchily drawn, but as bit players in this very Greek drama they served their purpose.  I found the BEFORE/AFTER format irritating. Halfway through, I contemplated reading all the BEFORE chapters and then the AFTER ones, but that would have meant I lost track, so I bore with it.And, because Ruth Ware is now classed as a bestselling author, the editing isn't there. Awkward sentences kept popping up to spoil the tempo. And why this fashion for "like" instead of "as if"?But I do recommend this book, and will keep following the author.
Posted by World of the Written Word at 1:56 PM
Email ThisBlogThis!Share to TwitterShare to FacebookShare to Pinterest