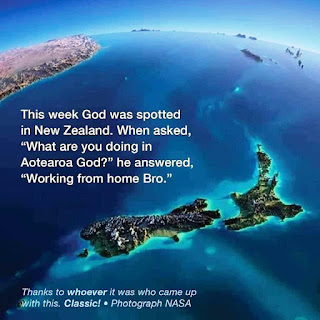 NewsHub reports that there were some hilarious reactions to the news that the bits from the Chinese space rocket happened to miss New Zealand.

As we all know, the out-of-control rocket zoomed back to earth, and there was some speculation about where the bits would land.  And, instead of expressing great relief that New Zealand was given a miss -- despite our world-shaking reputation right now -- commenters gave rein to the odd Kiwi sense of humor.

"Is it weird that I'm disappointed that #LongMarch5B didn't land closer to New Zealand?" one person asked on Twitter.

As others pointed out, it meant that no nosy reporters were given the chance to ask the stray bits what they thought of New Zealand, and how did they "feel" about the unscheduled crash.

"Rockets can't afford to land in Wellington," another remarked.

Though another did meditate that it would have been very disappointing if his house was demolished before he had had finished the cheesecake in the fridge.

"It would be really inconvenient for my house to be hit by a satellite on a Sunday when the metal recyclers are closed," another wrote.

Remnants of China's biggest rocket landed in the Indian Ocean on Sunday, with the bulk of its components destroyed upon re-entry into the Earth's atmosphere, according to Chinese state media, ending days of speculation over where the debris would hit.

Parts of the Long March 5B re-entered the atmosphere at 10:24 am Beijing time (2:24pm NZT) and landed at a location with the coordinates of longitude 72.47 degrees east and latitude 2.65 degrees north, Chinese state media cited the China Manned Space Engineering Office as saying.

The coordinates put the point of impact in the ocean, west of the Maldives archipelago.

Most of the debris was burnt up in the atmosphere, the China Manned Space Engineering Office said.

Posted by World of the Written Word at 8:51 AM
Email ThisBlogThis!Share to TwitterShare to FacebookShare to Pinterest