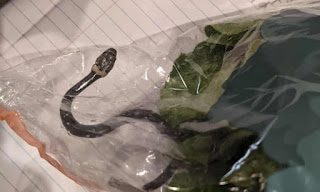 I have a rabid fear of snakes (New Zealand does not have any), but I do buy a lot of cos lettuce (what Americans call 'Romaine'). New Zealand also imports a lot of vegetables and fruit from Australia, which I suppose is a two-way trade.

So, does our cos lettuce, the kind where you get two in a plastic bag, come from Australia?

According to the Guardian, a fellow fan of cos lettuce, who happens to live in Australia, bought a bag of two lettuce heads in an Aldi store.  Then he put his shopping in his backpack, and cycled home. And apparently it wasn't even a smooth ride.

Then, as he and his partner were unpacking their groceries at home, out peeped this little snake.

One really has to admire the coolness and savoir faire of Australians.  Alexander White said that he only realized that it was a little snake (and not a big worm) when it kept on flickering its little tongue.  So he phoned the snake hotline, and was told it was probably a baby eastern brown, one of the most venomous snakes imaginable.

Well, I would have freaked out.  He did admit that he would have been more comfortable with a worm, but still thought it was cute.  He and his partner took many photos, and shared video chats with it with their children, who missed the big treat because they were away on school holidays.

Then the snake hotline got back to them, and informed them that it was a juvenile pale-headed snake, which was "medically significant."

Alexander thought that perhaps this meant it produced something useful for medicines, or something like that, but no, it apparently meant that if the snake bit him, he was to get to the hospital as soon as humanly possible.  And it was a surprise that it hadn't had a go, because pale-headed snakes are nervous by nature, and likely to strike out if agitated.

This must have been an unnaturally placid little snake.  After poking its front end out and having a look around, it retreated back into the lettuce and went to sleep.

So the couple put the lettuce bag in a tupperware container, leaving a little gap for air, so the snake wouldn't suffocate, and then checked the rest of their groceries, which were, thankfully, reptile-free.

Eventually, rather late at night, a snake expert turned up to take over the snake.  The delay, apparently, was because the snake people had been checking with the Aldi store to find out where the lettuce came from.  They wanted to take the snake back home, you see.  It turned out to be a town I have never heard of, called Toowoombah.  So off the snake went in a heated container -- and the couple washed the lettuce and ate it.

They have stronger stomachs than I have, that is for sure.

Posted by World of the Written Word at 8:42 AM
Email ThisBlogThis!Share to TwitterShare to FacebookShare to Pinterest