A particularly nasty side-issue of slavery in America 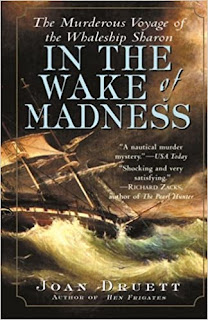 Did runaway slaves who arrived in New Bedford, Massachusetts, find a haven?  Or was there something even more terrible ahead?

This a horrifying story of one young runaway who escaped from one hell to find himself in another -- at the mercy of a sadistic, psychopathic whaling captain.


In the Wake of Madness, subtitled "The Murderous Voyage of the Whaleship Sharon," is Joan Druett's precise recounting and analysis of a dreadful murder -- and the equally horrific events leading up to it -- in the South Pacific in 1842.

In this engrossing story, readers will learn a great deal about whaling and the nautical culture that ranged from the shipyards of New England to the whaling grounds in the southern seas. There is also a great deal of biographical information on the vile Capt. Howes Norris -- who, although the victim of the murder in question, was by no means blameless for the deed -- as well as his hodgepodge crew.

There is, indeed, madness in the story, as well as mutiny, desertion, abuse, dismal luck, a bit of heroism in the immediate aftermath of the killing -- one sailor's efforts to retake the Sharon from the killers who tried to leave the rest of the crew adrift in small whaling boats is a saga all by itself -- and a great deal of duplicity and obfuscation in the longterm report and investigation of the crime. Drawing on news accounts, letters and journals from the time, Druett assembles a complete, complex tale that has eluded historians for nearly two centuries.

Anyone who enjoys Moby Dick will be interested to learn that author Herman Melville was himself at sea on a similar ship at the same time as the Sharon met its fate. Druett weaves so much history into her narrative, it's easy to see where Melville found his own inspiration for writing.

Druett is a consistent source of fascinating history from the sea. Highly readable and educational, In the Wake of Madness is a gripping story that will satisfy students of that era and any fans of nautical lore.
Posted by World of the Written Word at 1:16 PM
Email ThisBlogThis!Share to TwitterShare to FacebookShare to Pinterest