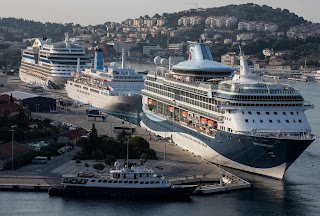 Arriving at a European port on a cruise ship can be a strangely claustrophobic experience.  It is sobering indeed to wake up to find your ship edging into a tight berth within a line of other cruise liners.  And it is even more thought-provoking to find that you have been docked miles and miles away from port, or that you are anchored a long tender ride from the nearest quay.  Indeed, arriving at a port which has not been "blessed" with big cruise ship arrivals -- as happened with us at St John's, Newfoundland -- is quite a treat.

The popular ports are finding the deluge of visitors uncomfortable -- as witness the graffiti in Barcelona telling tourists in no uncertain terms to "go home."  Dubrovnik is another example, as this item from The Guardian describes in an essay by Kate Connolly, titled A rising tide: over-tourism and the curse of the cruise ships.


Last year, as she describes, around three million visitors descended on the old town, most of them having poured out of around 400 cruise ships docked in the harbor.  A lot of this popularity is due to the hit TV series, "Game of Thrones," but it also must be remembered that this is a historic site, vulnerable to damage. Critics say the influx is causing long-term damage, but with the livelihoods of 80% of the locals dependent on tourist traffic, some are reluctant to address the problems.
Not only is there great strain on facilities such as sewage systems, and inevitable pollution, but there is an awful tackiness taking over from the sense of history.  Where once there were bookshops, bakeries, butchers, hair salons and markets, tacky souvenir shops and stalls now cater to the tourists. The boats themselves also burn huge amounts of fossil fuel, creating water, air and noise pollution, and severely affect the marine ecosystem.
So, what can be done about it?  Officials, it seems, are becoming uneasy. A growing sense among city residents that tourism has become overtourism has caused the mayor to introduce tighter controls: during mornings just two ships can dock, with a third after midday. Next year a limit of 4,000 daily visitors will be allowed ashore, and in two years each will face a €2 tax.
It isn't as if the city itself benefits financially from the burden cruise ships impose.  As we cruisers all know, the ships keep their engines running in port, generating their own electricity to keep the air conditioning flowing, the fridges running, and the elevators going up and down.  So another proposal is that the ships are forced to draw their electricity from the local grid.  But how can the local authorities enforce this?  Not easily.
Other ports face the same problem.  In Montenegro, the tiny city of Kotor often has three huge ships docked in port, each staying for an average of 12 hours. The third most popular cruise ship destination in the Adriatic, Kotor expects a total of 500 cruise ships in 2019, bringing more than half a million people. “Compare this to 2003 when there were just 50 ships and 50,000 people,” says Vesna Mačič from Kotor’s institute of Marine Biology.

Kotor is even more at risk than Dubrovnik because Montenegro is outside the EU, so EU laws don’t apply. The city has no recognised marine reserves, ships can use cheaper oil containing sulphur, and there are no restrictions on noise, which is known to damage organisms such as fish, dolphins and turtles. Kotor’s location – at the end of the Boka Kotorska bay, which is surrounded by large mountains – means gases emitted by cruise ships linger for longer, damaging local air quality. Fishermen and marine biologists also complain that the ships drag along the bottom of the bay, damaging the ecosystem, and that they discharge waste water, thus releasing foreign matter into the bay and further upsetting the natural balance. Flowering sea grass, clams and the rich seabed flora are said to have suffered as a result.
There is also the problem that the cruise ships are getting too BIG.  The latest to join the fleets are designed for up to 6,000 passengers, plus large crews, meaning that on any one afternoon over 20,000 people can descend onto a city.  No wonder the "hop on, hop off" buses line up on the nearest street -- and no wonder that traffic jams pile up.  It is also a strain on the ports, which can often handle only one behemoth at a time, so that the two or more that arrive later have to anchor in the harbor, and tender their passengers on shore.
The cruise line operators are certainly aware of the problem.  Every cruise ship I have voyaged on has been careful about following local rules, such as sailing very slowly in seas where whales migrate and dolphins play.  But it does seem to me that the future of cruising lies with the smaller ships, which can visit less frequented beauty spots, and sail in shallower waters.

Posted by World of the Written Word at 11:06 AM
Email ThisBlogThis!Share to TwitterShare to FacebookShare to Pinterest