Monstrous waves in the Southern Ocean, wild winds at the Equator

The natural world sure is changing.


Waves in the Southern Ocean have already been recorded over 20 metres in height, but new research shows they're getting higher.
A small but significant increase of 1.5 metres per second - 8 per cent - was noted by researchers who analysed approximately 4 billion observations from 31 satellites and 80 ocean buoys worldwide.
"Although increases of 5 and 8 per cent might not seem like much, if sustained into the future such changes to our climate will have major impacts," said Professor Ian Young from the University of Melbourne.
The study - published in Science - analysed data from 33 years and detected an increase in winds in the Antarctic Ocean, which increased by 30 centimetres or 5 per cent.
It also found extreme winds are increasing in the Pacific and Atlantic oceans near the equator, and the North Atlantic Ocean by around 0.6 metres per second. 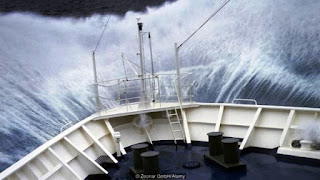 Such changes bring a number of threats.
"These changes have impacts that are felt all over the world. Storm waves can increase coastal erosion, putting coastal settlements and infrastructure at risk."
Young noted that any changes in the Southern Ocean can have a far reaching effect, as it is the "origin for swell that dominates the wave climate of the South Pacific, South Atlantic and Indian Oceans and determines the stability of beaches for much of the Southern Hemisphere".
Researchers are now looking towards the next 100 years, trying to create a predictive global climate model to help foresee any potential wind and wave changes.
"We need a better understanding of how much of this change is due to long-term climate change, and how much is due to multi-decadal fluctuations, or cycles."

Posted by World of the Written Word at 10:05 AM
Email ThisBlogThis!Share to TwitterShare to FacebookShare to Pinterest