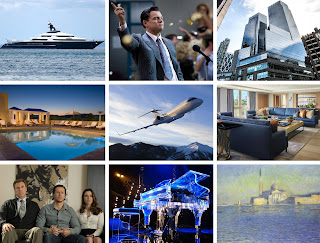 The pigeons are coming home to roost ... with legal difficulty

In the NYT, Alexandra Stevenson and Elizabeth A. Harris report.

The van Gogh and the Monet are safely in storage in Switzerland. The Oscar that once belonged to Marlon Brando is in a federal warehouse in Texas. Those were easy enough to corral.

But when the $250 million yacht was finally captured in Bali, the United States government couldn’t let it bob in the water unattended, so it had to pay for a crew. The $35 million Bombardier jet has been grounded, but it needed an engine test costing up to $25,000.
And no one is quite sure what to do with the see-through grand piano now sitting in a supermodel’s Malibu home. It won’t fit through the door.

All of the items, and many more, had been bought by a flamboyant Malaysian financier named Jho Low, who prosecutors say helped siphon billions of dollars from a Malaysian government investment fund, then went on a colossal spending spree. It is one of the largest international kleptocracy cases the United States has ever pursued.

It is so expansive that just tracking down, retrieving and maintaining the loot has become a complex multinational operation in itself.

Court documents and interviews describe a recovery effort that involves half a dozen federal agencies, a bevy of contractors and investigators in countries including Switzerland, Luxembourg and Malaysia.

Its targets include more than a dozen properties in New York, California and London, including a $31 million condominium in the Time Warner Center in Manhattan, the Viceroy L’Ermitage Beverly Hills hotel and a $17.5 million mansion in Beverly Hills that came with a gold-tipped pyramid floating in a reflecting pool.

The process has been slowed because of the pending criminal case, which itself is lagging because Mr. Low, 37, is a fugitive believed to be hiding in China. There are also thorny legal issues because Mr. Low and some of the other defendants have denied wrongdoing and are challenging the forfeitures.

Several of the items are owned by trusts, and Mr. Low “does not consider it proper for any government to seize property belonging to the trusts or himself,” said Robin Rathmell, Mr. Low’s lawyer.

The United States took the lead in the investigation because it has been cracking down on the flow of illegal money through the American financial system, and because until a few months ago, Malaysia’s own government was being run by the very people accused of ripping it off.

The fund at the center of the investigation, called the 1Malaysia Development Berhad fund or 1MDB, was supposed to benefit ordinary Malaysians. It raised billions of dollars from banks and borrowed from investors, ostensibly to finance projects like a joint venture with a Saudi oil company and the purchase of power plants.

But prosecutors say 1MDB became a “massive, brazen and blatant” money-laundering scheme, in which billions were diverted into the bank accounts of senior officials, including the former prime minister Najib Razak, his family and associates and Mr. Low.

Posted by World of the Written Word at 1:21 PM
Email ThisBlogThis!Share to TwitterShare to FacebookShare to Pinterest