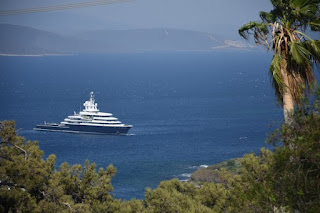 They say that there are only two happy days when you own a boat -- the day you buy it, and the day you sell it.  But this must be the most convoluted history of a boat I've ever read.


From the New York Times

Russian oligarch's $500 million yacht Luna is stranded in Dubai, because of the costliest divorce in British history.

With a spa, a swimming pool, two heliports and room for 18 guests, the Luna is more like a floating luxury villa than a yacht. A crew of 50 keep all nine decks in pristine shape. The lifeboats cost $4 million apiece. Gleaming engines propel the vessel at a maximum speed of 22 knots.

Built by Lloyd Werft of Bremerhaven, Germany, Luna, 115 metres (377 ft) long, is the second largest expedition yacht in the world, and the 23rd largest luxury yacht, valued at over €400m euros  --approx. US$545 million  -- as of April 2010.  She is currently owned by the defendant in a very controversial divorce action, Russian billionaire Farkhad Akhmedov.

One would assume that he enjoyed the occasional jaunt (though that, too, is debatable), but for now, as Segal goes on to say, the Luna isn’t moving. She sits in a dry dock in Dubai, the most fought-over prize in what has been called Britain’s most expensive divorce.

In December 2016, a High Court judge ordered Akhmedov, a Russian billionaire who has owned a home in England since the ’90s, to pay the equivalent of $646 million to his ex-wife, Tatiana Akhmedova. He refused, arguing that the couple had been divorced in Russia more than a decade ago.

But, it seems, the divorce was a fake, and the papers were forged.  Or so it is claimed.

Unconvinced and unable to enforce his ruling, the judge in April ordered Mr. Akhmedov to hand over the yacht, valued at roughly $500 million, to his ex-wife. It has since been impounded by authorities in Dubai, where it had turned up for maintenance.

For more than a decade, Russian oligarchs have been parking their families and some chunk of their net worth in England. A deal was implied: The oligarchs got a haven from the pitiless realities of Putin-era Russia, and Britain got an influx of very rich people.

Now some oligarchs are learning that life here has hazards of its own. That goes even for nonresidents like Mr. Akhmedov, who never became a British citizen. Eager to keep British tax collectors away from his money, he limited the number of days he stayed in England to a maximum of 180 a year. (More recently, the number was reduced to 90 days.)

In January, he appeared on the “Putin List,” an inventory of business and political elites in Russia, published by the Trump administration. Seven oligarchs — though not Mr. Akhmedov — have since been subject to sanctions that prevent them from conducting business in the United States

Even the Luna, the ultimate in high-end joy rides, is customized for a man anticipating trouble. It has a missile detection system, an anti-drone system, bulletproof windows and bombproof doors.

None of these features, however, have shielded Mr. Akhmedov from the British justice system, despite the exhaustive efforts of his legal and accounting team. Before arriving in the Middle East, the vessel had been on an epic journey, though one not measured in nautical miles.

As the nine-figure settlement was gaveled into divorce court history, Mr. Akhmedov began what the judge called a “campaign” to hide his assets “in a web of offshore companies.” Nothing demonstrates the breadth and ingenuity of that web like the Luna. Starting in November 2016, the yacht went on a whirlwind voyage, all of it on paper, in a feat of asset protection and financial engineering so elaborate that the judge diagramed it in an April ruling.

Initially, the seizure of the yacht in Dubai sounded like a setback for Mr. Akhmedov. Then, he and lawyers for the family trust that technically owns the Luna filed a claim — still pending — arguing that the fate of the yacht should be decided by a local court in Dubai, using Islamic law, known as Shariah.

Legal experts say Mr. Akhmedov has calculated that his odds of prevailing are better in a Shariah court, especially given that his ex-wife is a Christian who has acknowledged infidelity in their marriage. Stories in British tabloids have lately emphasized that Mr. Akhmedov is a practicing Muslim

That is news to Ms. Akhmedova. In her first-ever interview, which took place recently in the office of a public relations firm, she said she had never seen her ex-husband kneeling on a prayer rug or going to a mosque, other than at a tourist site.

“Apparently because he was born in Azerbaijan, he’s a Muslim,” she said, her eyes widening with disbelief.

A sunny woman with a mild Russian accent, Ms. Akhmedova wore ripped denim jeans, a batch of string bracelets and a T-shirt that read “Free as a Butterfly.” She said she was reluctant to speak publicly about her divorce, because everything about it is painful, including the recent media coverage in Britain, which has made much of allegations of infidelity leveled by both sides. 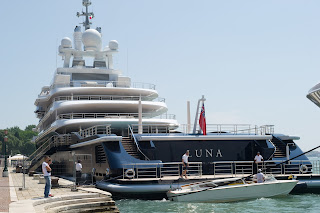 In 2014, Mr. Akhmedov acquired the Luna, which he purchased from Roman Abramovich, a friend and fellow oligarch. (Mr. Abramovich has had his own troubles with Britain recently, as the country has cracked down on a type of visa given to wealthy investors.)

Even the purchase was complicated, it seems, as Akhmedov's company bought it for $360 million US.

“It would take four years to build a boat like that,” said Ms. Akhmedova, who helped arrange the sale. “So we thought, why not ask our friend? He’s got two boats, let’s ask him for one.”

Two days before the start of the trial, in November 2016, lawyers and accountants took the helm of the Luna and shuffled it to a handful of companies controlled by Mr. Akhmedov and his allies, in the Isle of Man, Panama and Liechtenstein.

It eventually landed in a newly created family trust called Straight, which Judge Haddon-Cave wryly described in a ruling as “the antithesis of its name.”

“In my judgment, it is clear that Straight is simply another ‘cipher,’” he wrote, designed by Mr. Akhmedov “to evade enforcement.

A few months after the Luna arrived in Dubai for maintenance, the Dubai International Financial Center Courts — which conducts business in English and uses English common law — impounded the vessel.

Lawyers for Mr. Akhmedov and Straight have since filed an appeal with a Dubai entity called the Joint Judicial Tribunal, a seven-member committee created in 2016 and granted the power to decide which court has jurisdiction over a legal proceeding. Mr. Akhmedov contends that his dispute is a matrimonial one, which should be decided by a local Shariah court. He is not looking to relitigate the divorce, his spokesman said.

He simply wants a judgment that says the British order to transfer ownership of the yacht cannot be enforced in Dubai.

So will Ms. Akhmedova get the yacht?  Or will the boat lie and rot in the hot sun of Dubai?

Right now, it's anyone's guess.
Posted by World of the Written Word at 10:07 AM
Email ThisBlogThis!Share to TwitterShare to FacebookShare to Pinterest