Story of a Renoir, lost and found 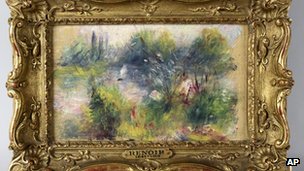 It looked like the bargain of the year, but then it turned into Oops!


Back on September 8, it was reported that a painting bought at a flea market in Virginia might turn to be a work by French master Pierre-Auguste Renoir.

It was bought by a woman as part of a box lot that included a doll and a plastic cow, and cost about $50.  Taking a close look at the tiny painting after she got home (it is so very pretty) she noticed a plaque on the gold frame announcing that it was a Renoir, so she took it to a local auction house. Excited, they took a closer look themselves, and decided it was Renoir's "Paysage Bords de Seine" - a river scene - painted about 1879.  Measuring just 14 by 23 centimetres, it seems it has a romantic story, having been painted on a linen napkin at a restaurant on the banks of the River Seine, and presented by the painter to his mistress.

According to the rest of the story delved up by the experts at the auction house, it had been bought from a Paris gallery by an American collector, Herbert May, in 1926.

Even more excitingly, they announced that they expected it to sell for up to $100,000.

Ian Shapira, of the Washington Post, did some digging in the records, and discovered it had been loaned to the Baltimore Museum of Art by Mrs. Saidie May in 1937.

At that stage, the mystery deepens. According to the Museum's records, the painting was stolen in 1951, just after the death of Saidie May, who left her entire collection to the museum.  But, there is no evidence of a police report.

This has led to some embarrassment. "Obviously, we take our responsibility for our collections and the things entrusted to us very seriously," the museum's director, Doreen Bolger told Mr Shapira. "We have to do more research and get to the bottom of the real story, and we're still in the midst of that process.

So there are murky details still to come.  Meantime, the painting has been removed from the catalogue of the auction house.  And the lady who bought the Renoir for a song has been hit with a dose of harsh reality.


Posted by World of the Written Word at 9:13 AM
Email ThisBlogThis!Share to TwitterShare to FacebookShare to Pinterest