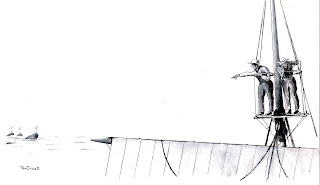 While I had my head down working on the index for Tupaia, the Remarkable Story of Captain Cook's Polynesian Navigator, which is being published by Random House New Zealand in May, a fascinating question came into the maritime history discussion list, from 'Pirate Lady' Cindy Vallar:


'I was watching yesterday's episode of Jeopardy!,' she began. 'One of the answers puzzled me.'


It claimed that the answer was: 'The lookout platform named for the bird that would be released to find the nearest land in bad weather.'
Obviously, as Cindy went on, the question was 'crow's nest' -- but is the answer right?  'I've not heard of ships carrying crows for this purpose before,' she confessed.


Well, neither had I -- and it electrified the discussion list, too.  Really, the mental image of a seaman clambering the rigging with a crow gripped in one hand, and then releasing the poor creature to flap off to the nearest shore, is pretty ridiculous.  So where did it come from?

Our folklorist, Morgy, also saw the program, and was equally mystified. 'Could we be dealing with another one of those wonderful widely disseminated "origin stories" that have come so popular since the inception of photocopiers and the internet?' she asks.

'This sounds like a natural conflation of two different episodes in nautical history,' says Nicholas Blake (who gave references).  'The crow's nest in the modern sense of lookout position high in the mast was invented by Scoresby senior in 1807. Scoresby junior, who describes its invention, doesn't mention why it got its name, but it's not unreasonable to infer it was from its similarity to a crow's nest. The Vikings were said to carry crows, but they didn't have a platform to launch them from.'
'Aha,' says Marc James Small.  Wikipedia (as is often the case) could be to blame. 'The Wikipedia entry for crow's nest cites a US Navy pamphlet from a decade or so back --- and
gives a hot link to this pamphlet -- which accepts the releasing of crows as the origin of
the term.'


Alexandre Monteiro tells us even more: 'Two crows, perched at both the stern and bow of a ship symbolize the city of Lisbon since 1173. It was in that year that the body of Saint Vincent was brought here... On a ship guided by crows.'


My own two cents worth is simply that the original crow's nest designed by Scoresby had some kind of protection -- like a canvas wrapped around hoops -- to shield the lookout in Arctic regions.  (Yankee whalemen stood in the open hoops.)


But why he called it a crow's nest, I do not have a notion.
Posted by World of the Written Word at 4:28 PM
Email ThisBlogThis!Share to TwitterShare to FacebookShare to Pinterest

I wonder if the name was at all influenced by the Biblical account of Noah's Ark - Noah sent out a raven and a dove to look for dry land. Ravens and crows are in the same genus (Corvus).

Of course it was the dove that actually returned with useful information! But perhaps they thought "dove's nest" sounded a bit wussy. :-)

That's a wonderful theory -- and plausible, too. Scoresby senior was a very religious man, so is very likely to have landed on a pious reference.

This presumes all such ships had only one mast.
Otherwise any sensible crow/raven/chook, instead of heading off into the wide blue, would flap straight over to the OTHER mast.

Love it! Somehow crows don't seem romantic enough to fit the world of sail, even on grubby little whalers.
I find that the first crow's nest was a barrel hoisted up to the topgallant crosstrees and lashed to the mast.
Personally, I would want to know the name of the man who did the lashing! The thought of it all coming adrift with a poor sailor inside is rather numbing.

I came upon this blog in my own research into the crows nest. I had been analysing some etchings by Theodorus De Bry and was struck by the detail of what I would call the crows nest in some of his depictions. His Lisbon Harbour Scene from circa 1593 clearly shows enclosed railed platforms but the thing that grabbed me was the presence of the bunches of arrows. The visual impact provided by the arrows is reminiscent of actual crows nests that tend to have long twigs projecting from them giving the nest a distinctive character. This picture would persuade me that the term 'crows nest' is medieval in origin and perhaps even refers to the archer that occupied it. In De Brys picture the archer is not present because he only occupies his post at night as a security guard, protecting the contents of the boat while it awaits its next departure.The visible flurry of arrows in the daytime advertising the security measures. This may have been the primary function of the crows nest, to house the nightwatch when docked. Out at sea it would have been a very uncomfortable place to be for any prolonged period.Then later, its use became necessary for explorers like Scoresby who patently designed it to serve specific functions. This is indeed a lot to infer from a sixteeth century etching but it is intriguing I think and I will continue to research.

My haunch is that the name "crow's nest" stems from a confusion between the Latin terms CORVIS (crow) and CORBIS (basquet).