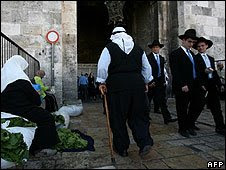 The BBC reports that Israeli police have shut down a Palestinian theatre in East Jerusalem, preventing the closing event of an international literature festival from being staged.

Police said they were acting on a court order, initiated by Israel's internal security minister. Saturday's opening event was also closed down.

East Jerusalem has been occupied by Israel since 1967, when the area was annexed.

The British consul-general in Jerusalem, Richard Makepeace (an ironic name, if there ever was one), was attending the event. "I think all lovers of literature would regard this as a very regrettable moment and regrettable decision," he said.

He added that the closing event will now be staged at the British Council in Jerusalem.
Posted by World of the Written Word at 10:31 AM
Email ThisBlogThis!Share to TwitterShare to FacebookShare to Pinterest