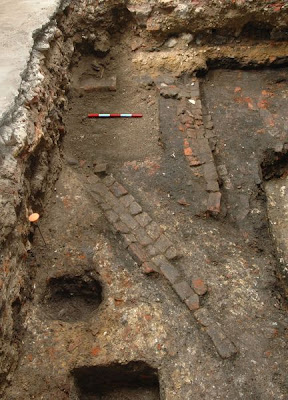 It's a Big Birthday for the Bard. Not only has a portrait made while Shakespeare was actually alive and around to sit for it been identified, but significant parts of his first theatre have been found

BBC News Online reports that a team from the Museum of London found the foundations in Shoreditch last summer. This is the theatre where Shakespeare started his acting career, and the premiere of Romeo and Juliet was staged.
Taryn Nixon, from the Museum of London, said her team has found part of the original curved wall.
They also uncovered a gravelled area, part of the pit where the common part of the audience stood and cheered on the players -- or threw local produce, as it should be added that the Shoreditch area was known as "the suburbs of sin" at the time. The group that was cheered or smeared was the Chamberlain's Men, Shakespeare's theatre company.
The original theatre was polygonal. About 25 years after it was built, it was dismantled timber by timber and moved to the South Bank of the Thames to construct the famous Globe Theatre.
Posted by World of the Written Word at 8:48 AM
Email ThisBlogThis!Share to TwitterShare to FacebookShare to Pinterest