There he leans
cracking wise,
biting his bright orange carrot
bugging the world
speed demon
ventriloquist
and master of disguise
he is everywhere at once
buck-toothed
and spectacularly eared
he is armed with dynamite
he is the only one
who really knows what's up 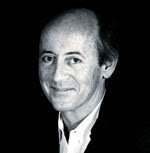 His latest collection, Ballistics, will be published in September.

Nelson Wattie sent me a clipping from The Independent (10/6/08) with a story by Emily Dugan and Ben Dowell: FEMALE CONTENDERS RULE OUT 'ARCHAIC' POST OF POET LAUREATE.

Three of the leading contenders for the post of Britain's first female laureate have dropped out of the game. At first glance, it is perhaps because they don't like sherry: the remuneration includes 630 bottles of the Spanish variety. However, it seems that writing "royal poems" is the rub. Andrew Motion, the current laureate, does a good job of this "without making a fool of himself," but others, including New Zealand's own Fleur Adcock (a resident of Britain), reckon it would be more trouble than it's worth. The fee -- in addition to that "butt of sack per annum" -- is just five thousand quid, hardly an incentive to abandon literary integrity. As Ruth Padel says, the kind of poetry she writes simply isn't suited to royal pomp. Fleur Adcock agrees, adding, poetry is a private business, and not meant to be carried out in public.

These women are in illustrious company: the laureatship has previously been turned down by poets of the ilk of Philip Larkin, Thomas Gray, and Sir Walter Scott.
Posted by World of the Written Word at 6:57 PM
Email ThisBlogThis!Share to TwitterShare to FacebookShare to Pinterest