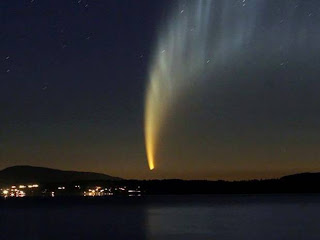 The Independent reports that a visitor from space is arriving fast, and at the end of November will become our biggest star.


At the moment it is a faint object, visible only in sophisticated telescopes as a point of light moving slowly against the background stars. It doesn't seem much – a frozen chunk of rock and ice – one of many moving in the depths of space. But this one is being tracked with eager anticipation by astronomers from around the world, and in a year everyone could know its name.


Comet Ison could draw millions out into the dark to witness what could be the brightest comet seen in many generations – brighter even than the full Moon.

Remarkably Ison might not be the only spectacular comet visible next year. Another comet, called 2014 L4 (PanSTARRS), was discovered last year and in March and April it could also be a magnificent object in the evening sky.

2013 could be the year of the great comets.
Posted by World of the Written Word at 2:43 PM
Email ThisBlogThis!Share to TwitterShare to FacebookShare to Pinterest