I can't resist telling this story, so a remarkable character joins my short throng of whaling wives. 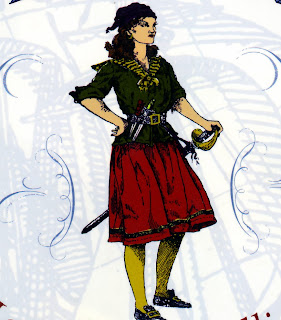 In the fall of 1862, a young fellow, who called himself George Weldon, but whose real name was Georgiana Leonard, signed Articles on the whaling bark America, Captain John Luce.  No one asked any questions, for this was the time of the Civil War, and whaling hands were very hard to find.  George looked likely enough, being tall, strong, and sturdy, though only about twenty years old.  S/he claimed that she had served in the Confederate cavalry, and explained a newly healed cut on his/her cheek as a wound sustained during hand-to-hand combat.  S/he had been taken prisoner, and sent to a Union hospital, and then had been released.


Once at sea, George proved a capable and well-liked member of the crew.  S/he danced the best jig, and had a good fund of ballads, sung in a fine tenor voice.  It was a quick temper that got her into trouble first, because she got into a ruckus with the “big black cook,” and won the fight.  “If he wasn’t such a mean hard cuss I’d say he was a woman,” Jethro Cottle, the third mate, observed at the time.  All he got, according to his recollection, was a general laugh, but then, on Friday, January 6, 1863, everyone abruptly remembered what he had said.

The boats had been off a-whaling, but had returned to the ship, because George had attacked Robert G. Smith, the second officer.  After several hours of rowing she had decided it was time for a rest, and when Smith decided to punch some sense into her head with a paddle, she pulled a knife on him.  The rest of the boat’s crew had subdued her after a lively struggle, and then returned to the bark, so Smith could report to the captain.  Luce ordered a flogging, which involved stripping to the waist.  Sullenly, George forestalled what would have been a riveting sight for the assembled crew, by letting on that she was female.


The laconic log entry for that day, apart from the usual seamanlike notations about weather and whales, reads, “This day found out George Weldon to be a woman, the first I ever suspected of such a thing.”  The chatter did not stop, however, neither then nor later.  Harriet, seafaring wife of whaling master Captain David E. Allen, of the bark Merlin, noted on August 25, 1869, that Captain John Adams Luce came on board “to pay me a visit and entertained me with a story about a woman who once went to sea with him, in men's clothing.”


George was not put on shore for another six months.  Luce was a practical sort of fellow, and instead of worrying his head about getting Georgiana into skirts, he merely ordered her to swap jobs with the cabin boy.  He didn’t care about the proprieties, and as it proved it didn’t signify, anyway.  As Jethro Cottle frankly admitted, “We couldn’t think of her as a woman at all—


She still wore her sailor togs, and besides, when you have come to look on a chap as a tough fellow, smoking tobacco and dancing jigs, and fighting with the cook, it’s hard to change your mind and regard her as a woman.


The crew, however, treated her well, no doubt regarding it as a capital joke, and were quite sorry when the America sailed into Port Louis on the island of Mauritius and Georgiana left the ship.
At long last she had adopted woman’s dress, Luce having organized a job for her as stewardess on a home-bound clipper ship that was also in port.  John Luce was displaying his practical streak yet again, for this meant she worked her passage home, and he neatly avoided being stuck with a bill.


For some reason, the episode was the making of young Georgiana.  By sheer coincidence, both the clipper and the whaling bark were back in Port Louis on June 14, 1864, exactly one year later, and Georgiana was still serving as stewardess.  She had done her job so well that the captain of the clipper had signed her on for another voyage.  She came on board and visited all her old shipmates, and they all highly approved of her, finding her a “neat, prosperous looking woman.”   And, what’s more, there was romance in the air, for she confided to Luce that she had fallen in love with the second officer, and that they intended to marry.


The America got home on May 4, 1865, to the accompaniment of a great deal of public interest, this story having got around, and a New Bedford pub, “The Sailor Boy,” was promptly dedicated to her name.  Georgiana herself did not drop entirely out of sight.  Years later, after John Luce had retired to a Martha’s Vineyard farm, she and her husband paid a call on him, which went so successfully that they repeated the visit several times in the following years.
Most of this story came from old newspapers, including the New Bedford Sunday Standard April 1, 1917, and an undated clipping from The Evening Standard of an item "Romance on a Whaleship, America's Murderous Mutineer Proved to be a Woman in Disguise" by Ellis L. Howland.  These were kindly located for me by Catherine Mayhew at the Martha's Vineyard Historical Society. The story, along with other yarns about cross-dressed sailors, was published in my book "Hen Frigates."

FOR MORE ON THIS FASCINATING TOPIC, HOP OVER TO LINDA COLLISON'S NAUTICAL POST, WHICH IS ABOUT WOMEN DISGUISED AS MEN ABOARD SHIPS IN THE AGE OF SAIL, AND HOW THEY PULLED IT OFF.
Posted by World of the Written Word at 10:57 AM
Email ThisBlogThis!Share to TwitterShare to FacebookShare to Pinterest

I LOVED this post! Isn't it funny that after having known her as George, her crewmates could not then see her as a woman! Fabulous!

Of course I LOVED this post! Especially the part how her shipmates just thought of her as one of the guys. So much of gender is all in the perception. Thanks for this post!

Hah! I knew you would like it! Great minds and all that.

What a fantastic Voyage this Blog Hop has been! The third part of my Blog Hop article is now up - please do share in this final phase of the Nautical On Line Voyage http://ofhistoryandkings.blogspot.co.uk/2013/08/weigh-anchor-nautical-blog-hop.html

Thank you to all who participated, authors and visitors alike. The Voyage has been wonderful!

What a great story! A tale one would hardly dare invent - and the sort of yarn that inspired Terry Pratchett's Monstrous Regiment.

Ah, wouldn't it be bliss to have inspired Terry Pratchett!