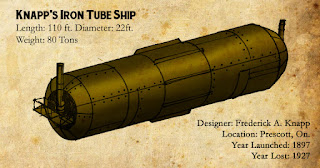 From Ottawa Rewind,  the steampunk dream machine that lies buried beneath the city of Toronto

The lord alone knows how terrible it would have been to voyage in this thing.  Steaming right into, or away from, a long crested sea, its heave behavior would be inherently pretty bad, in fact, at some speeds it would move up and down exactly the same distance as the wave height.  One turns a faint green at the very thought of it.  A visionary by the name of Knapp, however, went ahead and built it.

And this is the story the way Andrew King, of Ottawa Rewind, tells it.

Concealed beneath Canada’s largest city lies an iron apparatus designed in Prescott, Ontario from the Victorian Age that resembles an invention from the pages of a Jules Verne novel. A perfect example of the steam punk aesthetic, this 110ft. ironclad cylindrical vessel remains buried under the Gardiner Expressway, quietly resting below the traffic of thousands of commuters. Its remarkable story is one of innovation, passion and ill-fated decisions.  Join me now as we uncover the whereabouts of this lost tubular dream…
PROLOGUE

Prescott in the late 1800’s was bustling industrial town.
The small town of Prescott sits 45 minutes south of Ottawa and during the late 19th century it was a booming community of industry and innovation, a town that was the inception for J.P. Wiser’s Whisky, Ottawa’s first railway, the Prescott & Bytown Railway, and it even had Bell telephone service far sooner than any other town. The terminus for the Great Lakes Shipping industry, it also was home to a Labatt’s Brewery. It comes as no surprise that from its dusty streets would appear another creative force, an ironclad machine so imaginative, so unique and so bold that it would garner the attention of the world stage in 1897.
At the time Queen Victoria was the reigning monarch, but she never visited her colonies since she hated traveling by sea, as it made her sea-sick. In 1860 she sent her son, Albert Edward to Ottawa and on a North American tour in her place. This led one Prescott resident to design a ship impervious to the travel and motions that caused sea-sickness on the open sea. His name was Frederick Augustus Knapp, a lawyer turned inventor, and he designed what was probably the most bizarre, ambitious and unbelievable ship ever to be made.

Ripley’s cartoon depicting a strange and unique vessel that began my quest to find it.
I became fascinated with this iron clad marvel when I saw an old Ripley’s Believe-It-Or-Not illustration featuring Knapp’s craft, and always wondered what happened to it. I researched its history and it turns out the Iron Tubeship was designed and operated in Prescott, just a short drive from my home. As I dug deeper into its voyages through time I learned it now lies most likely buried under the Gardiner Expressway in downtown Toronto. But before we get to that point, how did such a ship get there in the first place, and why?
PRELUDE TO THE IRON DREAM
Fred Knapp had a vision for a giant tube ship 800 feet long that would glide over ocean waves at 60mph, undisturbed by the rolling sea. His idea was soon put to paper as he drew out plans for a scaled down version of his iron dream, imagined on his many trips across the Atlantic aboard steamship liners of the day. In an interview with the Prescott Telegraph in 1897, Knapp revealed he spent most of those voyages within the engine rooms of the ships he was aboard, studying the mechanics of how to overcome the resistance of water and waves. He realized that a ship must not fight them, but join them, and ROLL over the waves. Working at a law firm in Montreal, Knapp soon moved back to his hometown of Prescott where he set up a law practice and purchased a home in a stone triplex on Dibble Street.
Soon after drawing up plans for his mighty steam tube, Knapp presented the concept to Polson Iron Works in Toronto, and had built a working scale model 9 feet in length. The original drawings for the Roller Tube Ship are stored in the since closed Maritime Museum of the Great Lakes in Kingston, Ont., of which I unfortunately can not get access to at this time.
Knapp soon organized a joint stock company called “The Knapp Ocean Navigation Company” and raised funds from investors in Montreal, Quebec City, the UK and Toronto. His proposal to Polson Iron Works in Toronto was accepted and they were contracted to build the vessel as a working steam powered prototype at a cost of $125,000 (in 1890s dollars).

Knapp’s tube ship gained the attention of Scientific American magazine in 1898 with his unique design.
After some trials and tests, a full scale, 110-foot prototype was ready for launch in Toronto’s harbour in June of 1899. With Knapp aboard manning the helm, the innovative new ship was to travel from Toronto to Prescott on its maiden voyage.

Photo of the Roller Boat underway in 1898.
Perhaps because it was never officially christened or named, the poor ship was to be doomed. On June 9th it ran aground in Bowmanville, and it took a month for a tugboat to arrive and tow it all the way to Prescott where it was holed up and underwent modifications until the ship was ready for another sea trial in 1901.

Knapp’s Roller Boat steaming along, his portrait above.
Seeming to be a glutton for punishment, Knapp decided to test his newly modified ship on a cold February day, with a strong north wind that hampered its planned voyage across the St. Lawrence to Ogdensburg, NY.

Dressed for the February cold, the passengers await Knapp to take them across the St. Lawrence River to Ogdensburg, NY (Image: Morris History Of Prescott)
The strong winds were no match for the very hard-to-steer giant tube ship, and Knapp and his ship ran aground on a shoal of mud off Ogdensburg, where it soon became trapped in ice and snow. A rescue team was sent out in rowboats to retrieve the passengers and Knapp, who were suffering from exposure to the cold. The iron tube was towed back to Prescott where it remained for the winter.

Knapp decided to now modify the shape of his shape into that of a giant cigar, with conical ends, and a new engine, but it had to towed to Montreal for that work. After an arduous tow and retrofit in Montreal going through the myriad of canal locks, the roller boat was then towed back to Toronto across Lake Ontario, around Prince Edward County and into the docks of Polson Iron Works once again. There the ship sat, Knapp now out of money and investor interest, its forlorn hull left to languish in the waters off Toronto. The orphaned vessel that no one wanted broke free of its moorings and hit another ship causing damage to both ships. The now rusting hulk was sold for scrap metal to pay for the damages. As World War One began, it was said the tubular disaster was scavenged for its metal for the war effort, picked apart like a carcass under the beaks of vultures.

Showing its new cigar shape, but badly deteriorating due to salvaging its parts, the un-named Roller Ship lies in the waters off Toronto.
Left deteriorating in the shallow waters, legend says the ill-fated ship was buried under landfill when in 1927 the Toronto shoreline was expanded, its whereabouts unknown.
Read the rest to learn how Andrew King discovered its current location ... or thereabouts.

Posted by World of the Written Word at 10:59 AM
Email ThisBlogThis!Share to TwitterShare to FacebookShare to Pinterest