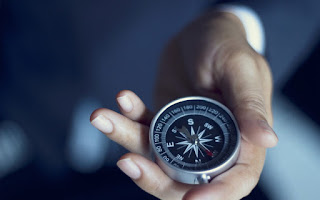 From time immemorial, man has navigated by the stars.  Then, over two thousand years ago, someone in China discovered the lodestone, naturally magnetized iron ore.  Oddly, its north-south orientation was not used at first by seamen, but instead by builders and architects, to place buildings according to feng shui.  But then seafarers realized that if a lodestone was hung from a string, its natural orientation was a great aid for navigation.

About 1300, compass needles -- made by striking iron needles with a lodestone -- appeared in Europe, probably adopted by Crusader sea-captains, who noticed them being used by their Islamic foes.  And so the discovery of new routes and new lands accelerated, as navigators had a means of telling the position of north.

But now, according to a RNZ report, that position is moving, rather rapidly.  The north magnetic pole has crept unpredictably from the coast of northern Canada a century ago to the middle of the Arctic Ocean, moving towards Russia.

"It's moving at about 50km a year. It didn't move much between 1900 and 1980 but it's really accelerated in the past 40 years," Ciaran Beggan, of the British Geological Survey (BGS) in Edinburgh, said.
A five-year update of the World Magnetic Model was due in 2020 but the US military requested an unprecedented early review, he said.
The BGS runs the model with the US National Oceanic and Atmospheric Administration.
An update will be released on 30 January, the journal Nature said, delayed from 15 January because of the US government shutdown.
Dr Beggan said the moving pole affected navigation, mainly in the Arctic Ocean north of Canada. NATO and the US and British militaries are among those using the magnetic model, as well as civilian navigators.
The wandering pole is driven by unpredictable changes in liquid iron deep inside the Earth.
"The fact that the pole is going fast makes this region more prone to large errors," said Arnaud Chulliat, a geomagnetist at the University of Colorado, Boulder, and NOAA's National Centres for Environmental Information.
But Dr Beggan said the recent shifts in the north magnetic pole would be unnoticed by most people outside the Arctic, for instance those using smartphones in New York, Beijing or London.
Navigation systems in cars or phones rely on radio waves from satellites high above the Earth to pinpoint their position on the ground.
"It doesn't really affect mid or low latitudes," Dr Beggan said. "It wouldn't really affect anyone driving a car."
Many smartphones have inbuilt compasses to help to orientate maps or games such as Pokemon Go.
In most places, however, the compass would be pointing fractionally wrong, within errors allowed in the five-year models, Dr Beggan said.
- Reuters
Posted by World of the Written Word at 9:07 AM
Email ThisBlogThis!Share to TwitterShare to FacebookShare to Pinterest