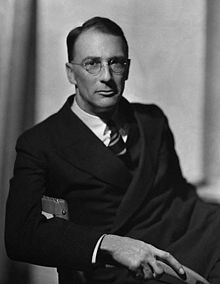 C.S. Forester rose to fame with books about naval warfare, in various eras.

His most notable works were the 12-book Horatio Hornblower series, depicting a Royal Navy officer during the Napoleonic era, and The African Queen (1935; filmed in 1951 by John Huston). His novels A Ship of the Line and Flying Colours were jointly awarded the 1938 James Tait Black Memorial Prize for fiction.

During World War Two, Forester moved to the United States where he wrote propaganda to encourage that country to join the Allies. While living in Washington, D.C., he met a young British intelligence officer named Roald Dahl, whose experiences in the RAF he had heard of, and encouraged him to write about them.

Forester died on April 2, 1966 but Horatio Hornblower lives on as a model to many other seafaring writers, a name that leaps to mind being that of Patrick O'Brian.
Posted by World of the Written Word at 11:23 AM
Email ThisBlogThis!Share to TwitterShare to FacebookShare to Pinterest

I think his book "The Ship" while unashamedly propaganda for the Allies is one of the more powerful works written during the war. Stands well with Monserrat's short stories collected as "Three Corvettes" and his work "HMS Marlborogh will enter harbour" and they were written from longer actual experience in that war.