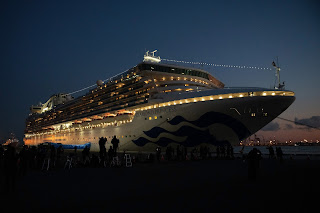 From the New York Times and the Guardian:

Nearly two thousand people spent their savings on a luxury cruise, expecting to get home to gloat over photographs and shared memories of being pampered.  Now, they are trapped on the ship in the port of Yokohama, while fellow passengers are taken off in ambulances, having been diagnosed with this new, fast-spreading virus.

The Diamond Princess is described as the epicentre of the coronavirus outbreak.  It is a strange sort of fame for those on board, and obviously something they could well do without.  One has to feel just so sorry for the trapped passengers and the Princess cruise line, one of the most caring and honorable in the business.


As the Guardian reports today, another 66 passengers have tested positive for coronavirus, bringing the number of infected people on the ship to 136.
Japanese health officials said the new diagnoses among 3,700 passengers and crew onboard the Diamond Princess included 45 people from Japan, 11 from the US, four from Australia, three from the Philippines and one each from Canada and Ukraine.
The vessel was quarantined when it arrived in Yokohama, south of Tokyo, early last week after it emerged that a passenger who had disembarked in Hong Kong late last month had tested positive for the respiratory illness, which has infected more than 40,000 people and killed at least 910. 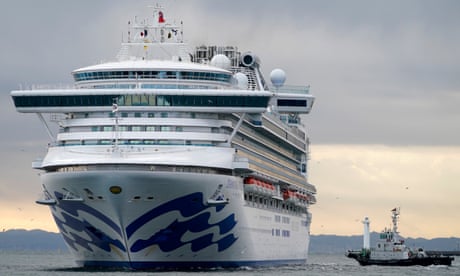 'The luxury days are gone': life on cruise ship stricken by coronavirus

Read more
On Monday, a week into their 14-day quarantine, some of the passengers were trying to fight off boredom by reading, watching live coverage of the Oscars, playing games or snoozing. Others were beginning to grow despondent, with at least another nine days to go before they will be allowed to disembark.
“Lots of the passengers now are getting a bit of cabin fever,” David Abel, a British passenger, said in a Facebook video. “Depression is starting to set in.”
Another passenger said he hoped assurances about the effectiveness of quarantine and ventilation onboard would prove true.
Quarantine has made life on board the ship difficult, particularly for those in windowless cabins and for the large number of passengers who require medication for chronic conditions.
***
It has developed into an awful kind of routine.  Three times a day, or so it is reported, there is a knock on the door, and when that door is opened it is to discover some kind of meal sitting on a tray.  When finished, the tray is equally invisibly taken away.
There is sense in keeping the passengers isolated from each other, of course.  But what about the crew members who are preparing the food and delivering those trays?  As I know from years of lecturing on cruise ships, crew members bunk in cabins for two -- or even four -- and eat at communal tables in the crew messes.  As the New York Times reports, below decks hundreds of crew members are eating and working elbow to elbow, as they do their best to keep life as comfortable as possible for the trapped passengers.  Bathrooms are shared by up to four people, and leisure time is spent in communal lounges.
In a way, it is a throwback to the conditions in the British sailing naval, back in the old days when "ship fever" and tuberculosis decimated the crews.  The comradeship might have been fun (and at least the crew members on the trapped Diamond Princess have the social interaction denied to the passengers), but it was definitely hazardous to health.

Posted by World of the Written Word at 9:07 AM
Email ThisBlogThis!Share to TwitterShare to FacebookShare to Pinterest