What is Moby-Dick worth today? 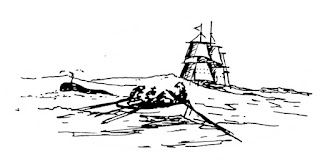 Though Melville didn't give precise dimensions, Moby-Dick was definitely a very large whale.  While sperm whales measuring over 100 feet (30 meters) have not been recorded these days, back in 1841, when Melville crewed on the Acushnet, "100-barrel" whales were common.

The whaleman's barrel was a rather vague figure, but it was generally reckoned that one foot of whale equaled one barrel, so a 100-barrel whale was one hundred feet long, give or take a few inches or more.  So that means that Moby-Dick was the same length as the fictional Pequod, whaleships being generally one hundred feet long, give or take another few inches.

So, if Moby-Dick was ever killed and then flensed of its thick coat of blubber, and that blubber turned into oil, the oil would fill one hundred barrels, again with some give and take, barrels not being all the same size and shape aboard ship.  How many gallons were in one barrel was another fairly vague figure, but experts tend to agree that it was thirty-three.  So Moby-Dick would have boiled out 3300 gallons.  And, on the New York market at the time, good spermaceti oil fetched $1.77 a gallon.

No small sum.  Today, however, it is claimed that Moby-Dick would be worth much, much more, as a carbon sink.  About three million dollars, in fact, according to a fascinating article posted in Stuff.co.nz 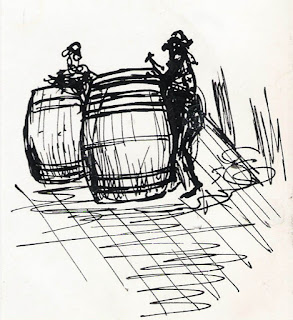 A great whale is worth US$2 million (NZ$3.1 million).
The size of that number so terrified Ralph Chami, the economist who appraised the whales, that he sought refuge in a church for the first time in 30 years. Inside St. Matthew's Cathedral here, a few blocks from Chami's office at the International Monetary Fund, the economist said he had "a conversation with the Maker. I said: 'If you aim to humiliate me, there are other ways of doing it.' "
Chami had, after all, veered outside his lane to make a first-of-its-kind claim. He studies macroeconomic policies in developing countries, not ecology. After deleting his whale calculations three times, and three times arriving at the same answer, Chami enlisted an IMF researcher, Sena Oztosun, as well as two outside economists, Thomas Cosimano and Connel Fullenkamp. They consulted whale scientists and research papers. The world population of whales is worth more than US$1 trillion, the researchers concluded in a recent report, due to whale tourism, the nutrients whales disperse and the carbon captured by their massive bodies.
"They didn't get cute with the problem. They made the perfectly sensible suggestion that, as a store of carbon, whales ought to be valued when alive on the basis of their carbon content," said Partha Dasgupta, an environmental economist at the University of Cambridge who was not involved with this work. Carbon dioxide released into the atmosphere is a greenhouse gas, but carbon stored in a whale body does not contribute to climate change.
"It's really exciting and a really creative approach," said Andrew Pershing, a climate change ecologist at the Gulf of Maine Research Institute. Pershing and his colleagues calculated, in a 2010 study, that the restoration of great whale populations to preindustrial levels would be equivalent, in tons of carbon captured, to the growth of a forest the size of Rocky Mountain National Park.
Climate change separates wildlife into survivors, including vines that thrive when carbon dioxide levels rise, and victims, such as bird species that are threatened by habitat loss and other disruptions. A few species are emitters, such as methane-belching cattle. Great whales occupy another category: sequesterers. An average great whale, a hypothetical animal that blends the characteristics of large baleen whales and sperm whales, traps 33 tons of carbon dioxide in its body, Chami said. A car releases about 4.6 tons of carbon dioxide a year.
"These animals are really good at pulling carbon out of the environment and storing that in tissues, in blubber," Pershing said. Demand for carbon-dense whale oil helped fuel the commercial whaling industry. During its height, between 1900 and 1999, 2.9 million whales were killed.
Three years ago, Chami, who counts naturalist David Attenborough as a childhood hero, travelled to Mexico's Sea of Cortez to volunteer with an organisation called Great Whale Conservancy. At night, after spending days at sea on a research boat following blue whales, the conservationists introduced Chami to the marvels of whale ecology.
"Some people call the baleen whales the first farmers on Earth," said Michael Fishbach, the Great Whale Conservancy's executive director. Whale excrement is so rich in iron and nitrogen that whale bowel movements trigger blooms of microscopic phytoplankton. Krill eat the plankton, whales eat the krill, the whales poop, the phytoplankton bloom and the cycle continues.
Long-distance transfers are key. "What's really special about whales is they live a life on this grand, global scale," Pershing said. If a whale feeds in the same place where it digests and excretes, the ecologist said, "it's not really adding to the system." But whales are mixers. They shift nutrients up the water column, a process called the whale pump. They shuttle across latitudes, from their feeding zones at the poles toward the equator, where whales give birth. (Even their placentas stimulate local ecosystems.)
And when whales die, they sink.
Most whale carcasses drop to the sea bed because whales with emptied lungs are slightly negatively buoyant. That process, known as a whale fall, delivers carbon to the ocean depths.
An ecosystem blossoms from the whale's flesh and bones. "By dying, they're creating something new - a new kind of life," said Craig Smith, a University of Hawaii marine biologist and whale fall expert.

Obscured by the deep ocean, whale falls are rarely spotted by humans. Scientists have observed only about 75 of them, Smith said, including experimental whale falls (in which beached whales are towed to sea, weighted and sunk). The Navy found eight in the 1990s while searching for a lost missile off the California coast.
Smith and his colleagues predict whale falls are actually abundant, considering whale mortality rates and the persistence of whale remains. Bones, jutting from an otherwise flat ocean bottom, can serve as habitats for decades. "There are clearly hundreds of thousands of whale fall ecosystems on the bottom of the ocean," Smith said.
On October 16, marine biologists aboard the research vessel Nautilus discovered a whale fall. "There was a lot of screaming, and loud voices exclaiming 'Whale fall!' and gasps," said the cruise's lead scientist, Chad King, a research coordinator at Monterey Bay National Marine Sanctuary. The vessel's underwater robot located the whale, which came to rest on the underwater slope of an extinct volcano named the Davidson Seamount. It was a baleen whale, which had died a few months ago, about 18 feet (5.4m) long.
The whale left a fatty halo in the sediment. A bed of worms and bacteria surrounded the body. Fish, squat lobsters and other scavengers picked at the carcass. Red bone worms bored into the whale's ribs. Octopuses, perhaps hunting snails and crabs, mobbed the scene. When the Nautilus crew hoisted the robot out of the water, its casing was slick with whale oil, King said.
"At last count, there were at least 100 species that we find in great abundance on whale falls and don't find anywhere else," Smith said. Worms named Osedax mucofloris, which roughly means "bone-eating snot-flower", were discovered on the body of a experimentally sunk minke whale in 2004. The worms are such specialised scavengers, they don't have stomachs; instead, they leach fat and protein from whale bones via acid secretions and digestive bacteria.
The carbon and its consumers will remain at the seabed for years to come. Whale falls in the Southern Hemisphere could trap 70,000 tons of carbon annually, according to Pershing's 2010 study, if whale populations returned to historical size.
In exchange for data on whales and carbon, Chami and his economist colleagues have provided scientists with a weapons-grade talking point. Dollar values persuade policymakers in ways that appeals to biodiversity cannot, Chami said.
The valuation of whales was a conservative minimum, the authors of the report emphasised. "The results we have now are based more or less on a composite whale. We're looking to break this down by species," said Fullenkamp, an economist at Duke University.
"Even if they got the details not quite right, their estimate seems right as a ballpark figure," Dasgupta said. Notably, a living whale is valued "far higher than the market price of whales when dead".
The price of a whale as a public good will also rise with the price of carbon. IMF recently proposed taxing carbon at US$75 per ton. At that value, a whale jumps to US$5 million or US$6 million, Chami said.
The reception to this approach has been so positive that conservationists asked him to calculate the value of wild elephants and British salt marshes. Earlier this year, Chami received a letter. The whale appraisal "is a potent and valuable revelation", the note read. "I shall most certainly quote it whenever it seems appropriate." It was signed by Attenborough. 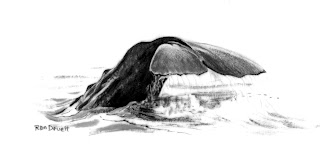 Originally published in the Washington Post. Illustrations by Ron Druett


Posted by World of the Written Word at 10:10 AM
Email ThisBlogThis!Share to TwitterShare to FacebookShare to Pinterest