The Maritime World of the Hanseatic League 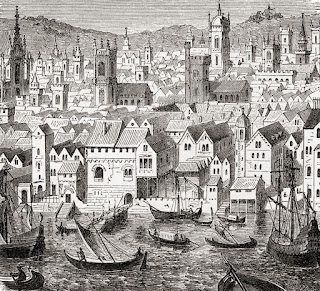 From Chris Morris at the BBC

Was it the first EU?


Behind the station on the banks of the River Thames, a street sign - Hanseatic Walk - gives a clue to the wealthy merchants who once dominated the area.
And on the red-brick wall of the Cannon Street railway bridge sits a plaque unveiled in 2005, commemorating “600 years during which time some 400 Hanseatic merchants inhabited peacefully in the City of London… a German self-governing enclave on this site”.
This was the London base of the Hanseatic League - a powerful trading network for hundreds of years, stretching all the way from the East of England to the heart of Russia.
It was one of the most successful trade alliances in history - at its height the League could count on the allegiance of nearly 200 towns across northern Europe.
London was never formally one of the Hanseatic cities, but it was a crucial link in the chain - known as a kontor or trading post. The community of German merchants who lived on the banks of the Thames were exempt from customs duties and certain taxes.
“At any given time they probably had about 15% market share of English imports and exports,” says Jens Tholstrup, an economist with a strong interest in the Hanseatic period.
Their reputation for reliability was such that it has often been suggested that the UK currency, Sterling, was a shortened form of “Easterling” - the local name for the Hanseatic traders.
This theory has been contested in recent years, but Tholstrup says the merchants nevertheless earned the trust of their English neighbours.
“It was a sign of their probity, that people trusted their currency. So when merchants here in England wanted to be paid in Easterling pounds, there was a sense that that was something they could rely on.”
The League’s London base was known as the Steelyard (see the lovely etching at the head of this post) - probably because of the metal seals used to certify the origin of different types of cloth brought here for export.
None of its buildings - the warehouses, chapel, guildhall or residential quarters – remain. But as Alison Gowman, a City of London alderman, points out, their presence is revealed in place names - Steelyard Passage, running under Cannon Street station, or the Pelt Trader pub, beneath a railway arch. “It’s opposite Skinners’ Hall where the fur trade was based, and the Pelt Trader has used that name as a reminder of one of the most important Hanseatic imports into London. It’s a fantastic link.”
The Steelyard came to dominate England’s cloth trade, and the wealth of its German merchants was captured in Hans Holbein’s 16th Century portraits. 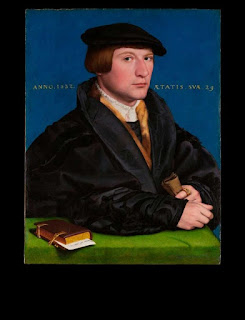 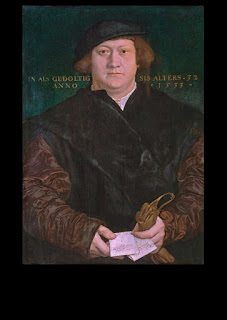 Success also bred resentment and disputes with local traders, but it was an early example of pan-European co-operation. So to what extent can the Hanseatic League be seen as a forerunner of today’s European Union?

“People sometimes misuse the term and say the Hanseatic League promoted free trade. They absolutely did not. Their whole strategy was about creating monopolies and negotiating privileges,” says Tholstrup.“But on the other hand, I think they created a network and developed prosperity at a time when the Baltic was a pretty bleak place. So the transformation they helped to generate was the origin of the prosperity of northwestern Europe.”

The League certainly did intervene at times in politics, supporting monarchs, imposing trade boycotts, and fighting wars. But Alison Gowman insists the primary objective was always financial.“It was in order to keep their trade routes open. And, in that sense, it was about freedom to trade rather than free trade, and I think that is an important element of how the EU developed.”

What the League did not have, of course, was the kind of political and economic structures we now associate with the EU. But as the UK prepares for Brexit, could it provide a model for trading links in the years ahead?
Posted by World of the Written Word at 2:21 PM
Email ThisBlogThis!Share to TwitterShare to FacebookShare to Pinterest