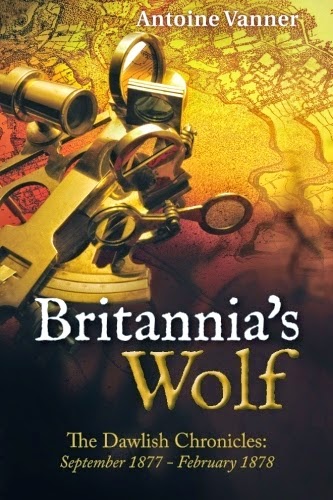 Antoine Vanner is the Tom Clancy of historic naval fiction. This is a techno-thriller in the true Clancy nuts-and-bolts style, except that it is placed in the late nineteenth century, during the transition from sail to steam, instead of in the nuclear-powered present.

Where the followers of C. S. Forester and Patrick O’Brian luxuriate in the crack and rattle of canvas, and the niceties of getting a wind-driven ship into battle, author Vanner revels in the throwing power of cannon, propulsive power of engines, and weight of armor plating. It is all very detailed, tremendously impressive, and very convincing.

The same depth of research has gone into the background of the decline and fall of the Ottoman Empire. Vanner hurls his protagonist, Nicholas Dawlish, into the forefront of the bloodiest battles between the Christian Russian invaders and the Moslem Turks.

While Britain is theoretically neutral, and the Turks are international lepers after the wholesale butchery of Bulgarian Christians, it is important to British commercial interests that the Russian Czar does not get the chance to dominate British trade routes by occupying Constantinople. Therefore Dawlish, vulnerable because he so ambitious for advancement in the Royal Navy, is coerced into signing up with the Ottoman Navy.

His mission: to seize a gunboat, and wreak havoc on the Russian supply lines in the Black Sea. After that, the action is hot and hectic, rather unusually spaced between the quarterdeck and the stokers in the lowest hold. Though they succeed in an unexpected way, the approach to the story provides an insight into Dawlish’s job, rank, and state of mind.

His mission then becomes rather unusual.  He has to place the ironclad’s cannon on land, in the path of the Russian thrust on Istanbul. Once this appallingly difficult task carried out, he is impelled toward Plevna, where the Turks are making their last despairing stand, to rescue the woman he is coming to love, along with her misguided Nightingale-type mistress. He gets to her side, only to face overwhelming forces.

Bloodshed—much bloodshed—follows. But, thankfully, while Vanner is describing a really brutal part of history, he does not wallow in violence. Intelligently, he leaves the worst of the atrocities to the reader’s imagination.

The major part of the story happens between December 1877, when Plevna falls, and the compact between the major powers that settled the war politically in March 1788.  In between, is winter—a winter that is unimaginably brutal, and yet the writer makes the reader experience every detail of the horror. What this reader came out with is a huge admiration of the soldiers and seamen who underwent the ordeal, along with a contempt of the politicians who engineered it.

The motif throughout is Dawlish’s growing love affair.  The social strictures surrounding it are authentic of the age, as anyone who has watched Downton Abbey will attest. The resolution is rather hastily engineered, however, which is the reason this review gets four stars rather than the five it really demands. The moment when Dawlish succumbs to his better feelings deserved more space.

Otherwise, a hugely recommended book, particularly for technically minded maritime fiction fans, and anyone who was addicted to Clancy. Most unusually, I was so engrossed by the driving force of the story that I didn’t pause to hit google or even look up an encyclopedia to find out the background of what Vanner was describing so vividly.

Britannia’s Wolf should be a bestseller, and it is an indictment of the traditional publishing world that it is an Indie book.
Posted by World of the Written Word at 6:54 PM
Email ThisBlogThis!Share to TwitterShare to FacebookShare to Pinterest