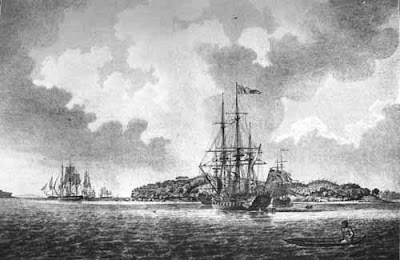 It all began with Joseph Banks.

Having been one of the very few who had visited the eastern coast of the continent now called "Australia," while lording it over as self-funded botanist on the Endeavour, he was considered an expert.  The problem facing the current government was what to do with the flood of convicts that were being herded into derelict ships that lay moldering in the mud of the Thames. Men, women, and children were being sentenced in great numbers, for crimes as trivial as the theft of short lengths of cloth, but transportation to the Americas was not possible any more, America having won its independence.

So Banks wrote a paper.  It was called Heads of the Plan for Botany Bay, and recommended New South Wales as a place “for effectually disposing of convicts,” who had increased alarmingly in number, “particularly in the Metropolis.” All that was needed, Banks declared, was “a ship of war of a proper class, with a part of her guns manned and a sufficient number of men aboard for her navigation, and a tender of about 200 tons burthen, commanded by discreet officers” to escort a fleet of convict ships, carrying “seven or eight hundred convicts, including one vessel for women” along with a couple of companies of marines, including craftsmen, carpenters, a chaplain, and a surgeon. And, once the convicts were settled on the new land, the tender could be sent to Tonga or New Caledonia, to fetch some willing girls to keep the marines and craftsmen company.

The government liked the idea, with the result that in August 1786 the Admiralty was ordered to organize suitable convict ships “with all possible execution,” plus a flagship, the sixth-rate HMS Sirius, and an armed tender, HMS Supply, to escort them. Captain Arthur Phillip, a personal friend of Banks, was put in charge, and the little fleet sailed out of Portsmouth on May 13, 1787.

At the head of the armada was HMS Sirius. Arthur Phillip was on board as admiral, and John Hunter as ship’s captain, while the second lieutenant was Phillip’s close friend, Philip Gidley King. Trailing behind were five convict transports, including the Scarborough, which was carrying 208 male convicts; the Charlotte, with 88 convict men and 22 convict women; the brig Friendship, with 76 men and 21 women; and the Prince of Wales, with just one male convict and 49 women. Also in the squadron were three storeships, Fishburn, Golden Grove, and Barrowdale. The armed tender HMS Supply raced back and forth, keeping them all in order.

The fleet sailed via Tenerife, Rio de Janeiro and Cape Town. On November 25, a few days after leaving the Cape of Good Hope, Phillip shifted from the Sirius to the faster Supply, taking King with him. This was in the hope of reaching New South Wales much earlier than the rest of the ships, to give him a chance to sum up the territory, and prepare for their arrival. However, bad weather slowed the Supply, and it was not until January 18, 1788, that Arthur Phillip set foot on the territory that he would govern — with great difficulty — for the next four years.

The Sirius dropped anchor in Botany Bay just two days later, on January 20, 1788. Short as the time had been though, it had been long enough to find that Joseph Banks had been dangerously over-optimistic. As Phillip wrote to the Secretary of State, the anchorage was shallow and dangerous. Even the smaller ships were “obliged to anchor” at the open entrance of the bay, “exposed to a heavy sea that rolls in when it blows hard from the eastward.” Instead of the fertile, fruitful meadows that Banks had described, Lieutenant King, sent out to scout, found a “country low & boggy, & no appearance of fresh water.” There was no place that looked likely for setting up camp. In short, as Phillip glumly concluded, “I did not see any situation to which there was not some very strong objection.”

Accordingly, the governor decided to take three boats, commanded by officers, and explore the prospects of the great inlet Cook had called Port Jackson. To his delight, he “had the satisfaction of finding the finest harbour in the world,” surrounded by lush meadows. One of his boat’s crew, Jacob Nagle, was equally pleased with the prospect, describing an extensive haven with a scattering of large trees and a good run of fresh water. When he dropped a line over the side of the boat, to fill in the time while Governor Phillip and the officers were exploring, he hauled up a fine, large fish — a black bream. “Recollect,” said Phillip to Nagle after he returned to the boat, “that you are the first white man that ever caught a fish in Sidney Cove where the town is to be built.”

Phillip returned to Botany Bay, where he at once ordered the ship captains to prepare to weigh anchor. On January 25, he went ahead in the Supply, “leaving Captain Hunter to follow with the transports” and by the next evening they were all moored in the spectacular bay he had named in honor of his patron, Thomas Townshend, Lord Sydney.  And next morning the British flag was raised, on what was to become memorialized as Australia Day. 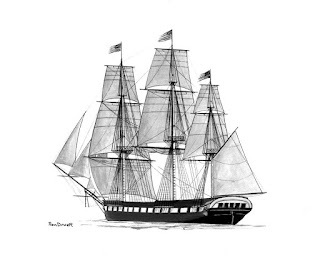 Posted by World of the Written Word at 2:21 PM
Email ThisBlogThis!Share to TwitterShare to FacebookShare to Pinterest