While I continue to find it odd that all the news about bestsellers focuses so tightly on fiction, this report from The Guardian holds great interest ....

"Amazon reveals quarter of Kindle ebook sales in US were for Indie publishers," runs the headline. 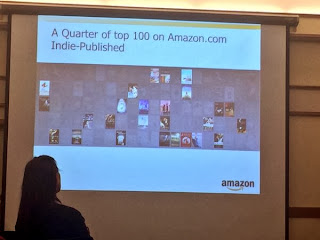 "A chart detailing the 25 top-selling indie titles in 2012 was passed on by an audience member via Twitter. Though the term indie is broad, covering everything from self-published authors to publishing houses that fall outside the big six, the news has been interpreted as a victory for the go-it-alone author. However in the US the term has come to mean self-published. A spokeswoman for Amazon.com said: "This figure is referring to Kindle books on Amazon.com in 2012, with 'indie' meaning books self-published via Kindle Direct Publishing (KDP). So a quarter of the top 100 bestselling Kindle books on Amazon.com in 2012 were self-published via KDP."

"Writer.ly , an online marketplace that connects authors with freelance editors, book designers and marketeers, tweeted a picture of the chart on Wednesday. It displayed the top 100 books, with about a quarter of the covers highlighted, under the title 'A Quarter of top 100 on Amazon.com Indie-Published'."

Personally, I think that too much could be read into this figure.  Amazon's ePublishing arm, KDP, has an aggressive marketing system, where authors who have published eBooks through KDP Select have a range of promotion options, including freebie days, and membership of KOLL, the Kindle Owners' Lending Library, which is a nifty way of getting one's work known. Additionally, any Indie author who chooses to enrol in KDP Select gets preferential treatment, with their book being featured in banners such as Hot New Releases, Also Viewed, and so forth and so on. In a word, there is more focus on their book, making it more likely for it to be featured in the various Amazon bestseller lists.

But that doesn't mean that I disagree with the Guardian commentator's view that Indie publishing, whether by individual authors, or cooperative groups like our own Old Salt Press, is going to play a growing role as time goes on.  If all the signs are right, then it is indeed the way of the future
Posted by World of the Written Word at 9:24 AM
Email ThisBlogThis!Share to TwitterShare to FacebookShare to Pinterest

I live in New Zealand. As Chap O'Keefe, I have been an author of internationally published Western novels since 1993. Kindle editions of some of these books have been selling for $US2.99 for several years.

But now there is an Australian Kindle store where they are priced at $A3.99, which converts to $US3.66.

I have asked Amazon to explain, but they are still researching my question. What they have told me so far is that as a New Zealander, I am treated as an Australian and will now be charged the extra 67 US cents for $US2.99 eBooks!

"Currently, when you visit Amazon.com from a location that is not assigned to this marketplace we'll display the price of the marketplace that you are assigned to (In this case amazon.com.au) in US currency.

"All U.S.-based readers do have access to the regular price of $2.99, and all publishers from New Zealand and Australia only have the option to buy from Amazon.com.au at the price of AUD$3.99."

Now can anyone please tell me, since Amazon to date can't or won't, how does this help New Zealand and Australian readers, writers or publishers?

That is totally fascinating. I have upped the price of a couple of my books, because Amazon was charging more (as were most of the online stores) so I thought why not? And sales, which were good already, have improved dramatically. I thought it was because viewers believed that a better price means greater quality, but you have made me think again.

And I love your books. I wish Westerns were not so out of favour right now.